A cousin to the popular wood garden gate #29, simplified with a straight top rail.

Every morning for weeks Adlai is confused by the paw prints on his new gates. Eventually, pushed to the brink, he sits poised against the inside of their new acquisition. Waiting, waiting, and finally, late into the night, gun in hand . . . 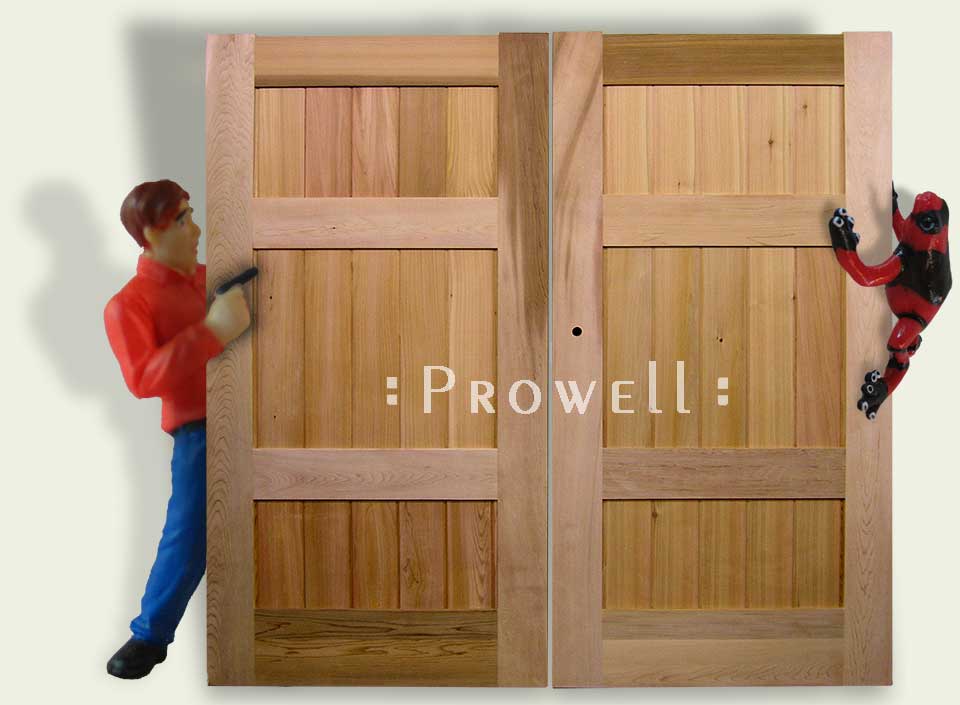 The #30 wood privacy gate at this residence in Tiburon, CA, situated on the San Francisco Bay, looking south toward Sausalito. The double Garden Gates on the right and the single Wood Gate on the left. Neither is visible in this photograph, but sometimes it’s just nice to look at the residence itself. 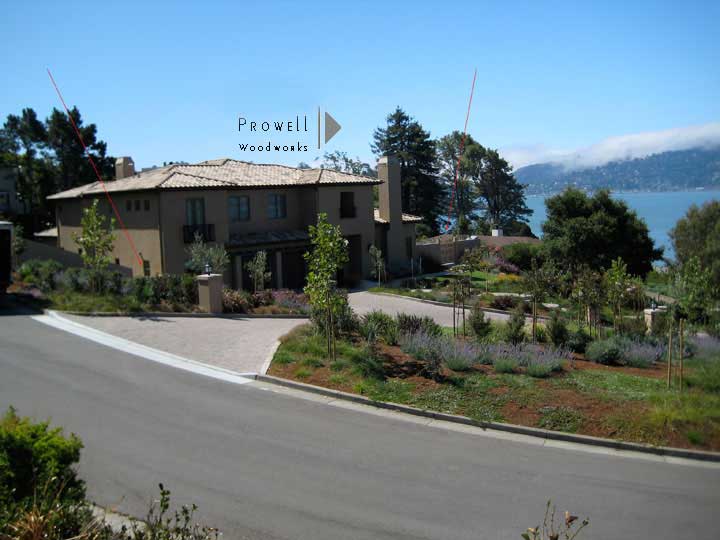 The double wood garden gates #30, mounted to Prowell jambs, which are in turn mounted to stucco walls. Showing the Bronze #40-300 Thumb Latch 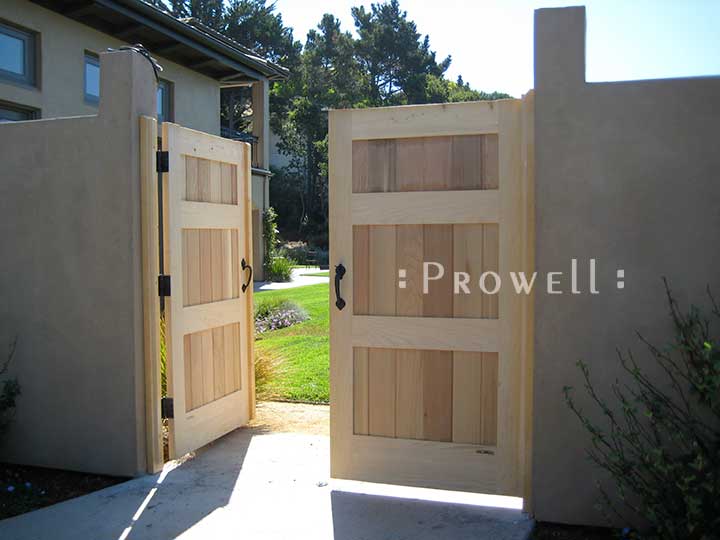 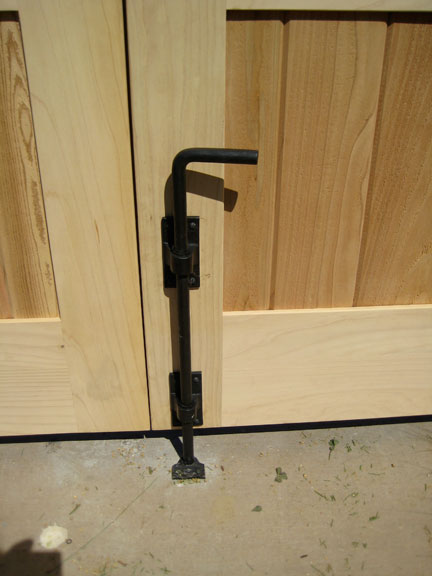 The left side wood gate #30, illustrating the lines of the stucco wall as a mirror to the similar line of our Wood Gate. 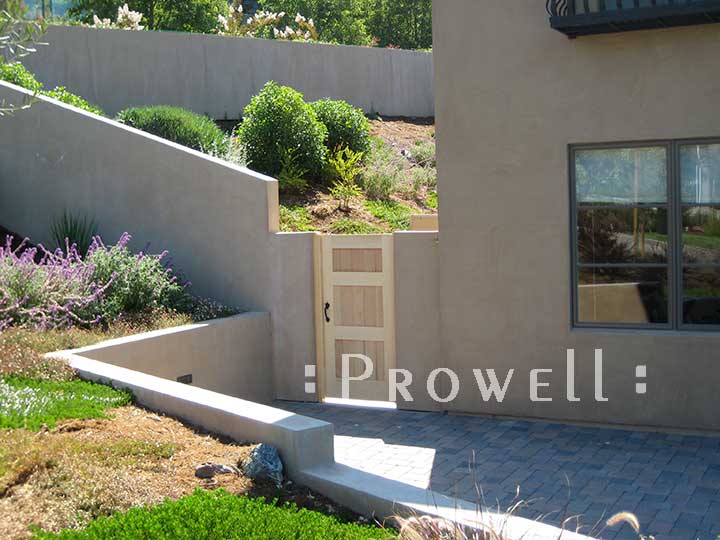 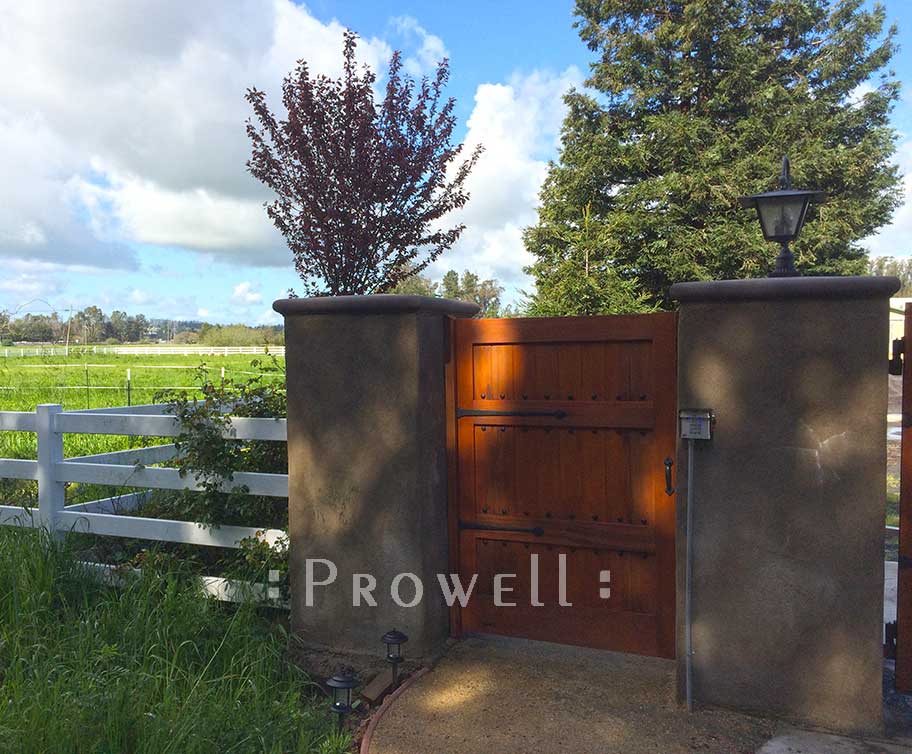 Wood privacy gate #30-3 in Bolinas, CA.
Only one horizontal middle rail.
One of eight sets of gates securing the perimeter of a newly acquired property
Latch: Rocky Mountain E358.
Finish: Unknown. Provided by the homeowners.

. . . in heart of one of America’s last and most original outposts. Tucked away on the edge of the Pacific an hour north of San Francisco with a citizenry so defiantly off-the-grid that there hasn’t been a road sign to the turnoff along Highway 1 for at least 40 years.

One of Charles’ oldest friends has lived here since the late 60’s, when the Baby Boomer hippies were sequestered within a half a dozen similar enclaves along the coast (think Big Sur), and where so many of them never left. Harbored from the ugly realities of a bureaucratic democracy.

A woodcarver who has no driver’s license, no bank account, no cell, no computer, no taxes. On a recent visit a photo of the two, as well as his current carvings, polished with his thumb and the oils drawn from the side of his nose to a natural luster irresistible to the touch. 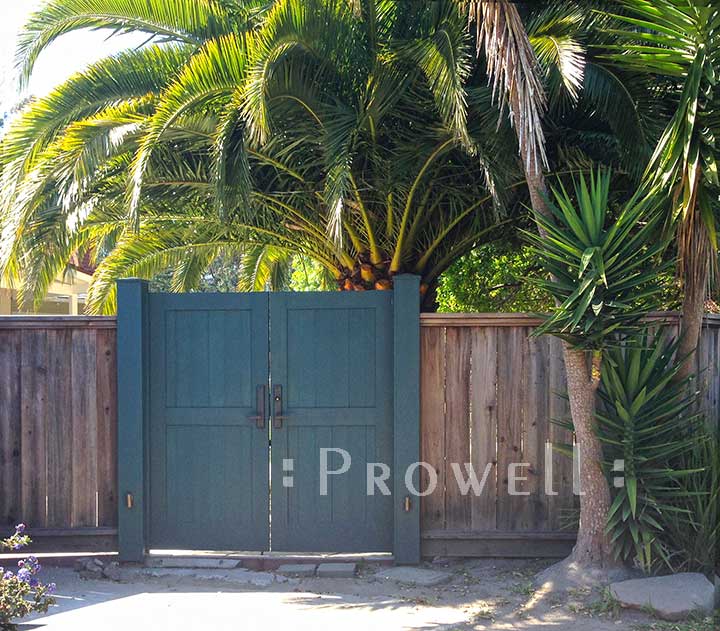 A second entry, as a single gate
Latch: Rocky Mountain E414 and the dead bolt DB507 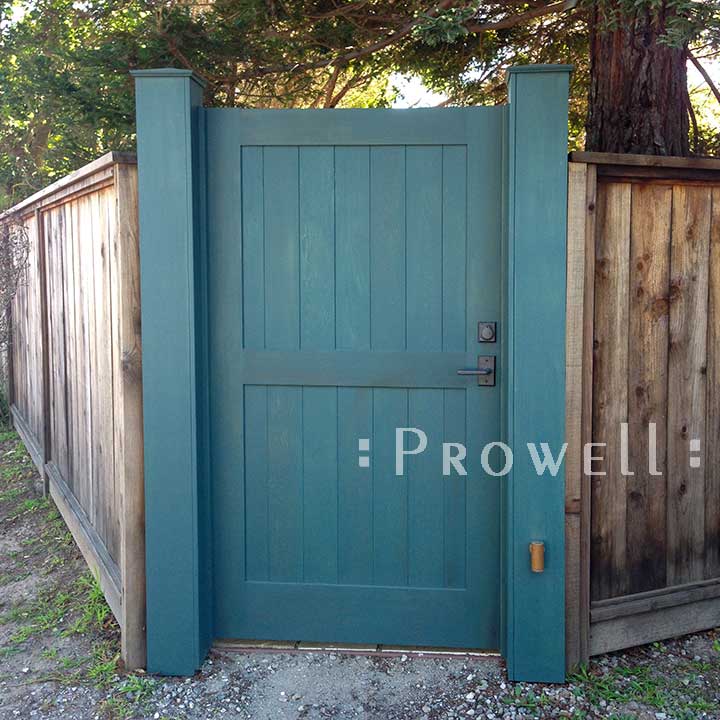 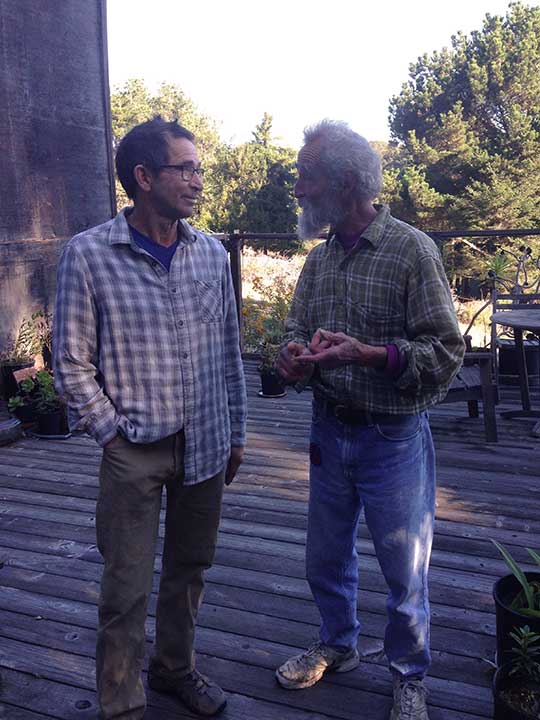 Wood privacy gate #30-2 shown at 46″ width by 48″ height, Illustrating how the change in widths and heights can alter the visual proportions.

Bored for a Rocky Mountain Latch and dead bolt, both of which ship directly to the site. 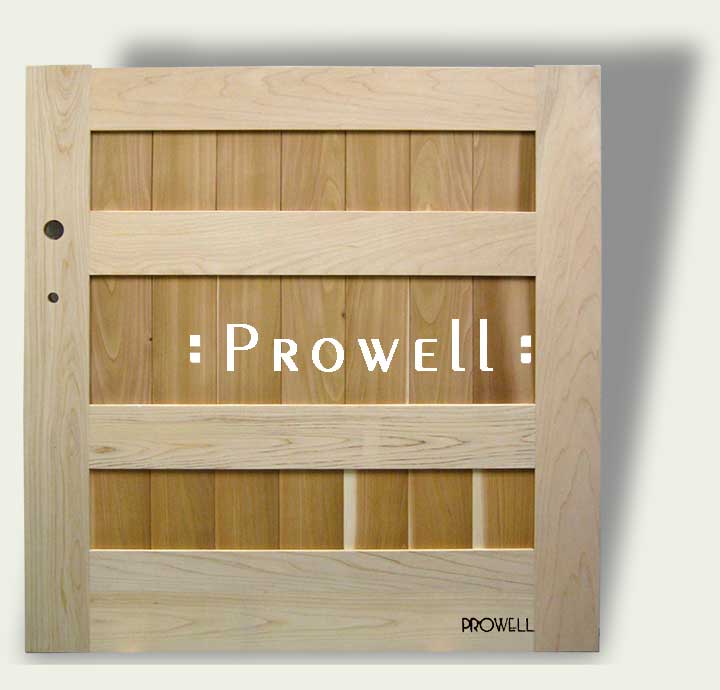 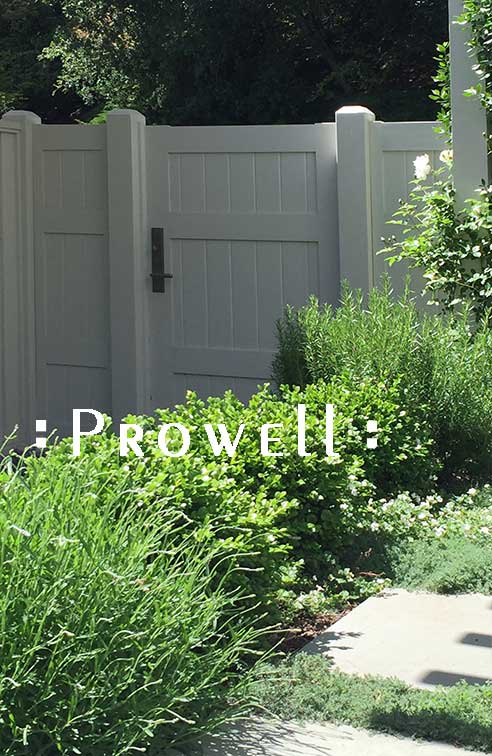 Two examples of the wood gate design #30 with a horizontal orientation. 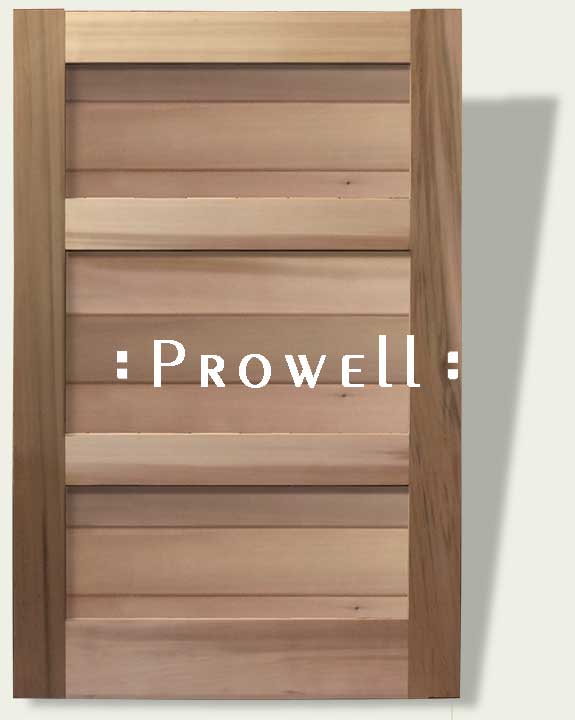 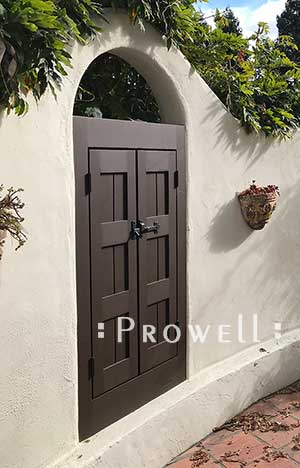 Prior to painting, exposing the inner courtyard to the outer gardens 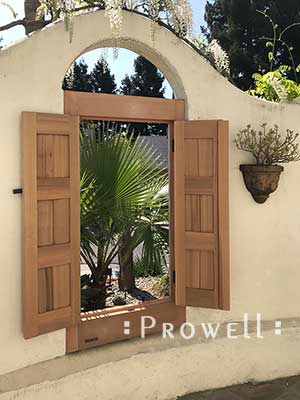 A different usage for the #30 gate. Included here because the application itself is appealing. Privacy portals built into a perimeter stucco wall that encloses an inner courtyard. As shown above right, they are opened as windows to a separate garden outside the courtyard. 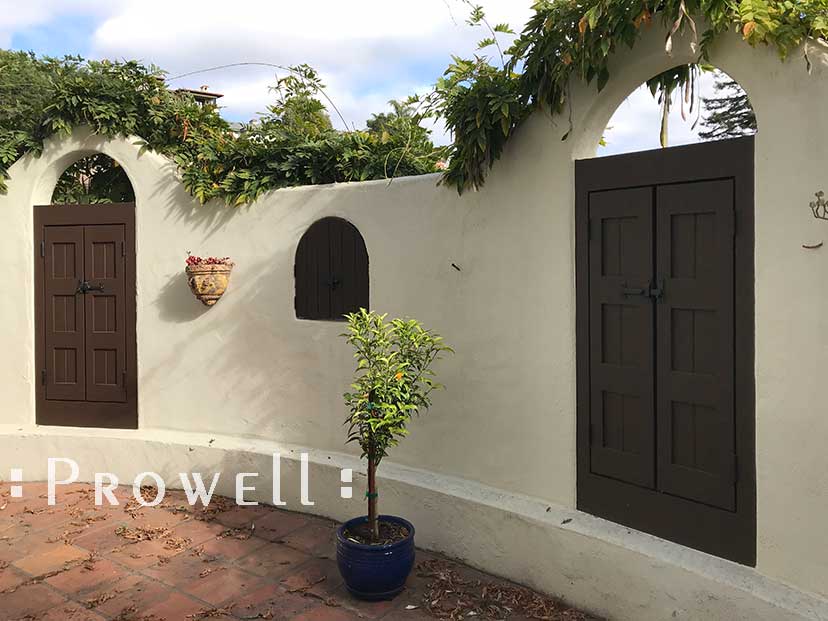 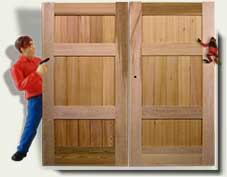 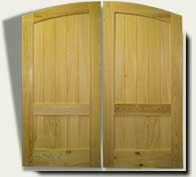 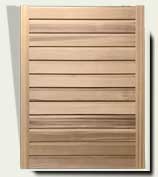 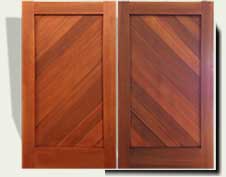 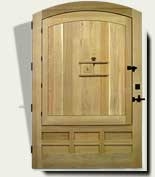 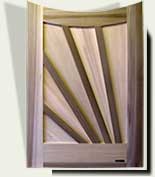 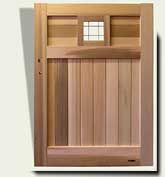 To GALLERY 1A
The Designs of Prowell Woodworks are protected by Patents and Patents Pending.