(Available as a single or double gate)

It’s hard to explain the original inspiration behind the idea for these unusual wooden gates.  A labyrinth of hand-carved shoots leading here and there. Something different, is all. 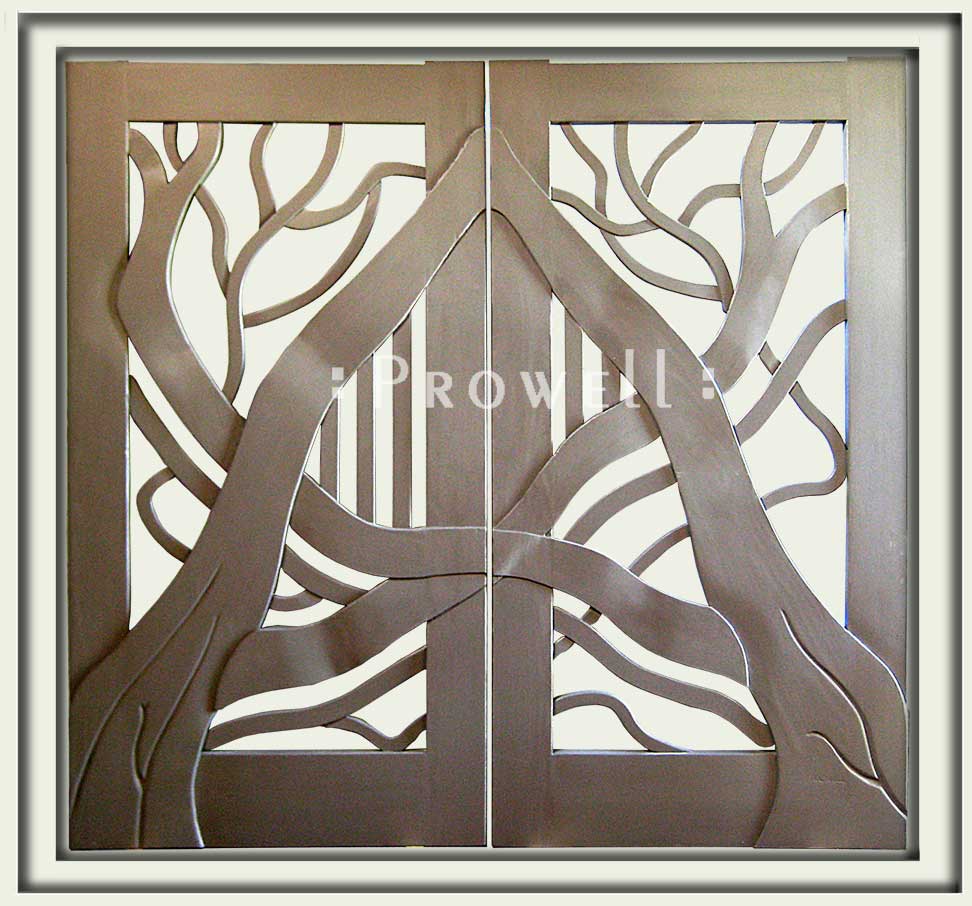 What has been tagged simply Prowell’s Unusual Wood Gate #204, shown as the entry gates to a home along the 17-Mile Drive in Pebble Beach, CA. An ideal confluence, all in all, with the windswept Monterey Cypress famously associated with the area.

* Showing an arbor built and installed on site to buttress the unstable stucco walls. 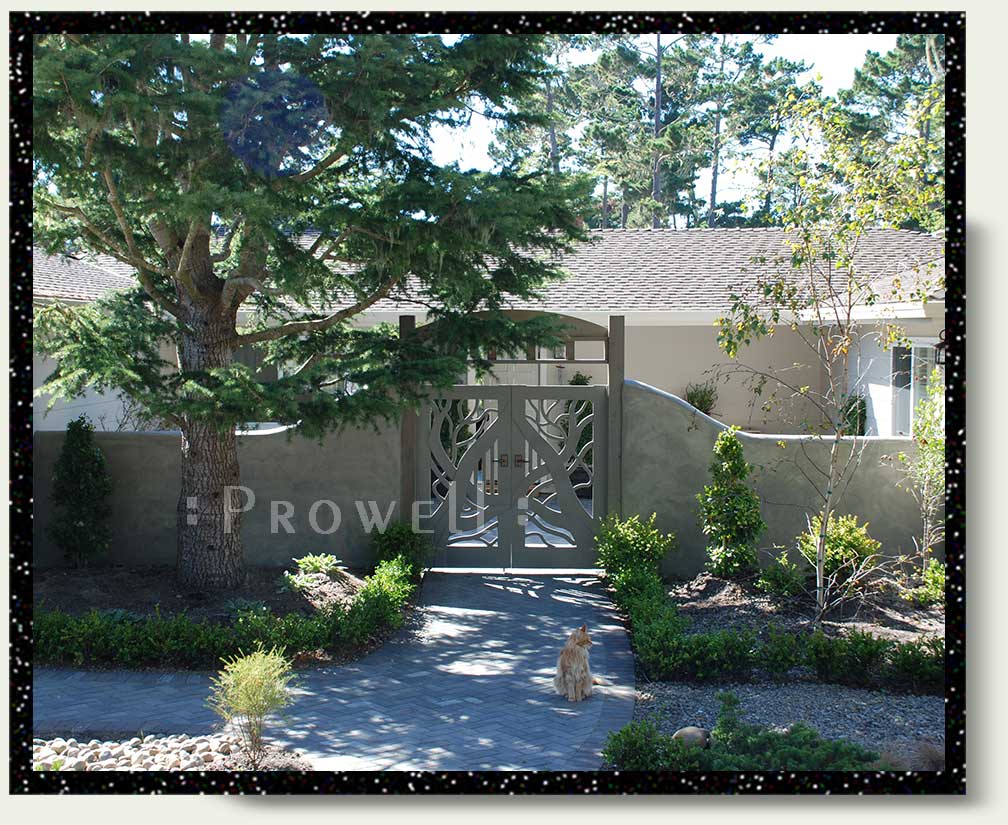 A photo two months later, without the arbor. The stucco wall itself was settling, apparently due to a  high water table and a soft soil substrate.  The walls are ultimately stabilized and the arbor was removed. Thank you.  Shown with Rocky Mountain Gate Latch E414. 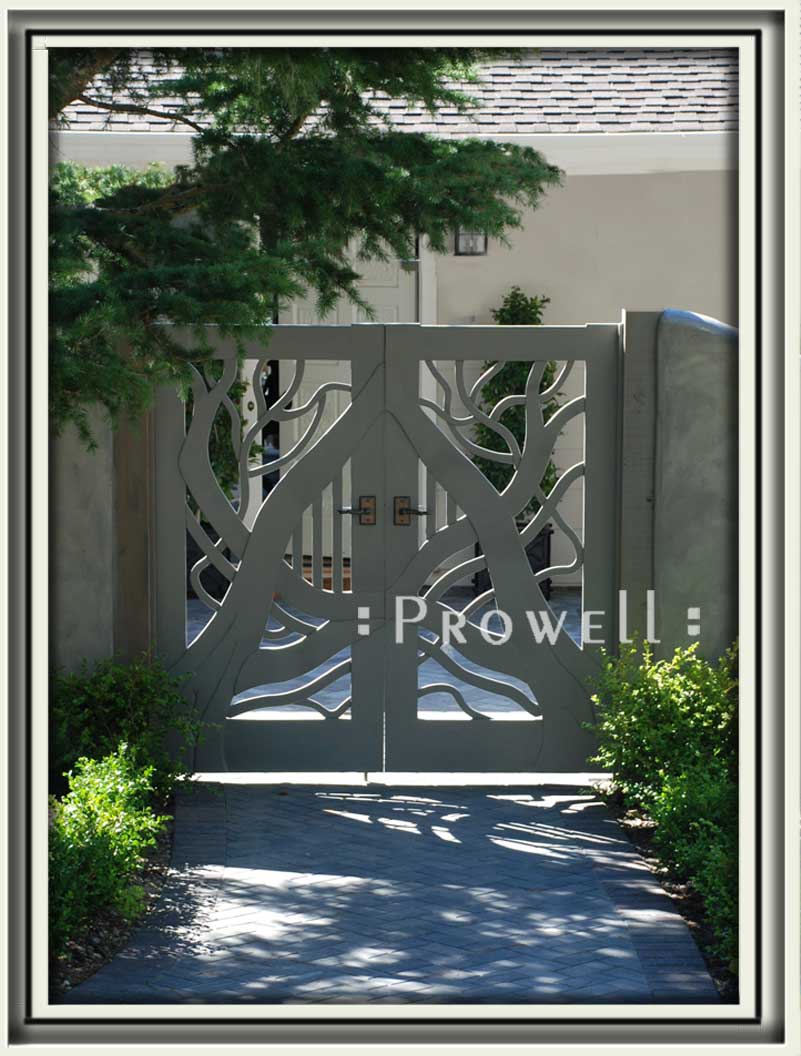 There are varying levels of depth, giving the impression of continuity as the smaller branches pass through larger limbs with the illusion of organic garden gates. 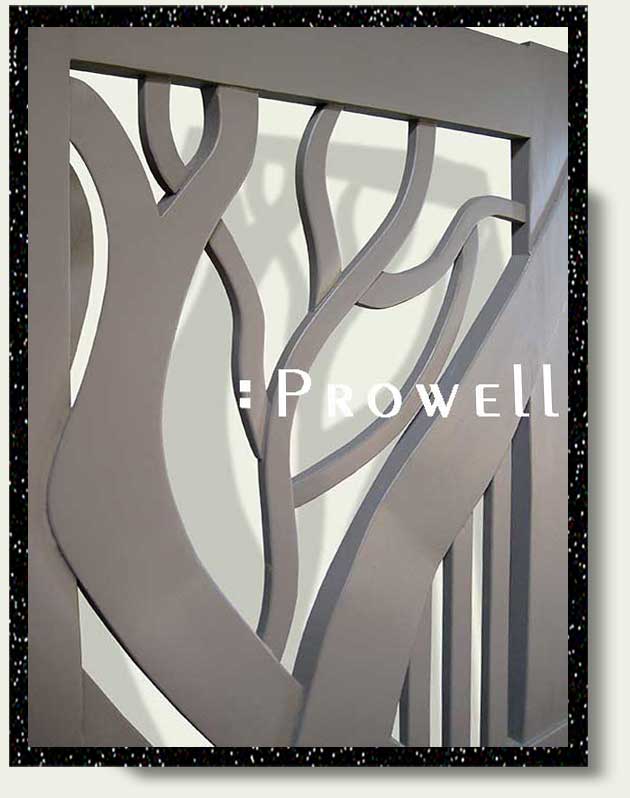 Each of the secondary limbs are joined by a mortise and tenon joint that varies in its size and stress load. For strength, these secondary limbs were hand-carved from the dense ipe species. 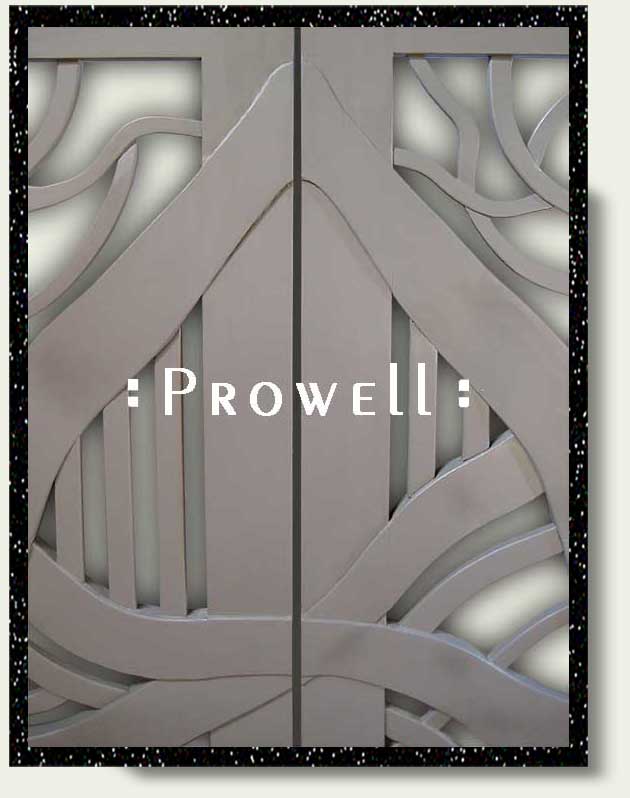 The technique of creating relief, and depth, was first attempted in the mid-1980’s on the stand-up mirror below. 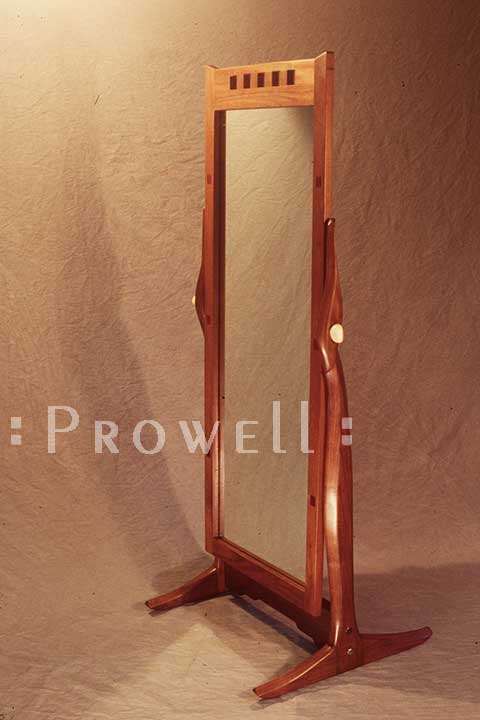 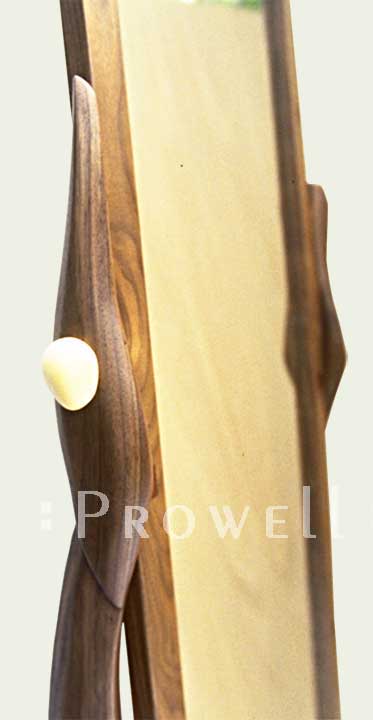 Creating the relief begins by scoring the line with a sharp marking knife. Followed by opening up the scored line using the same knife. And then the chisel, working away the stock in a gradual feathering. The relief details throughout the hand-carved wood gate 204 are replicated with this same approach. 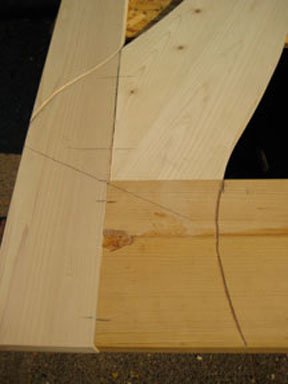 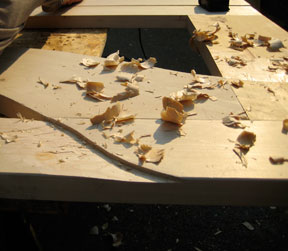 It’s advisable to settle upon a system for honing your chisels that is quick and easy, lest it be put off and you’re working with dull tools. This adage from the novelist Cormac McMarthy: “Most men are in their lives like the carpenter whose work went so slowly that he had no time to sharpen them.” 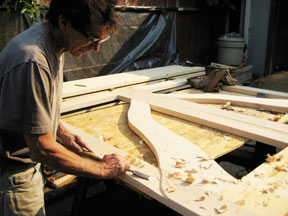 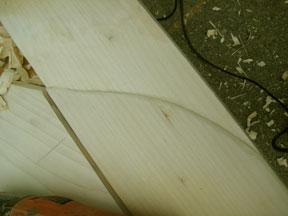 The first interlocking branches of what is sizing up to be one of the more eccentric garden gates in our arsenal. .Each joint must be hand-cut. 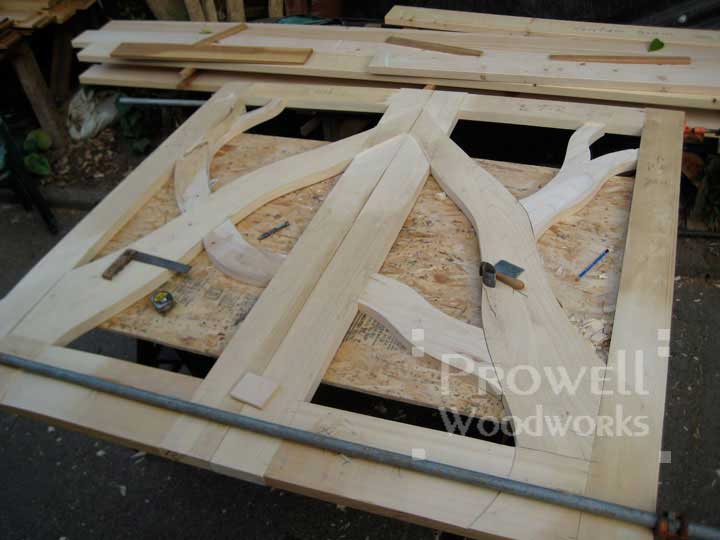 The growth of our secondary planes begin to take shape. Having spent inordinate hours sketching trees as an art and architecture student, the lessons of perspective and vanishing scales return to dictate the separation from the primary and secondary layers. This will be furthered when the hand-carved garden gates are actually assembled and glued to a final position, followed only then by the remedial carving that will distinguish the limbs on their distinctive planes. We would hope to see, from a distance, a sense of depth we see when actually viewing a tree; how the limbs and branches in the background are foreshadowed to those larger limbs in the foreground by the existence of size and shadow. In a two-dimensional work, we’ll create the illusion of shadows by carving reliefs at strategic points of confluence.

We are in the infancy. We are incalculably lost to the ravages of logic and common sense. Really, there is no plan. No template. There is only an aesthetics’s apprenticeship for planes and dimensions and perspectives to be coupled with fundamentals of a 15-year apprenticeship completed 30+ years ago. 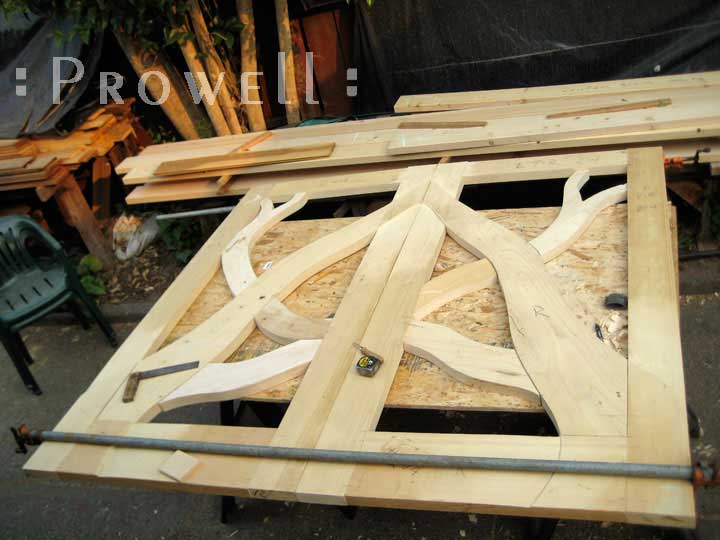 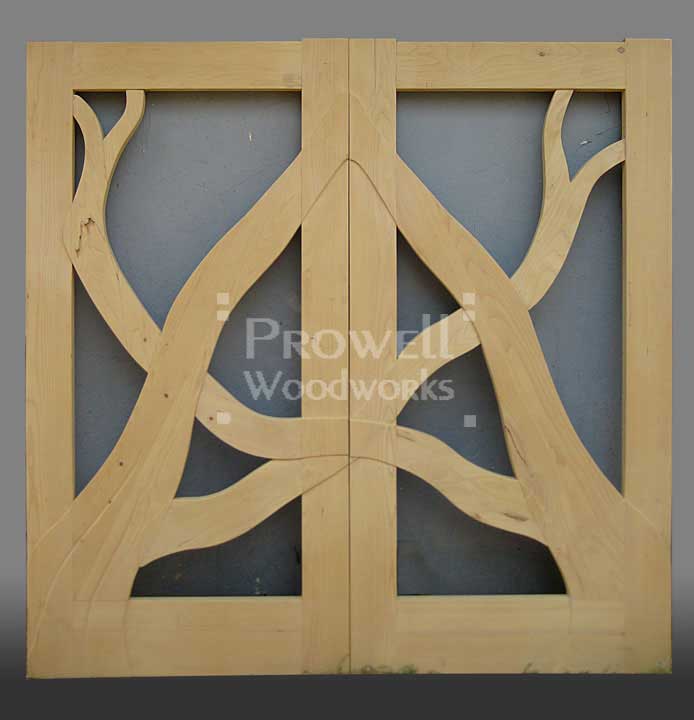 Chiseling away the stock with the thin shavings of a blade that is kept honed to a razor’s edge. 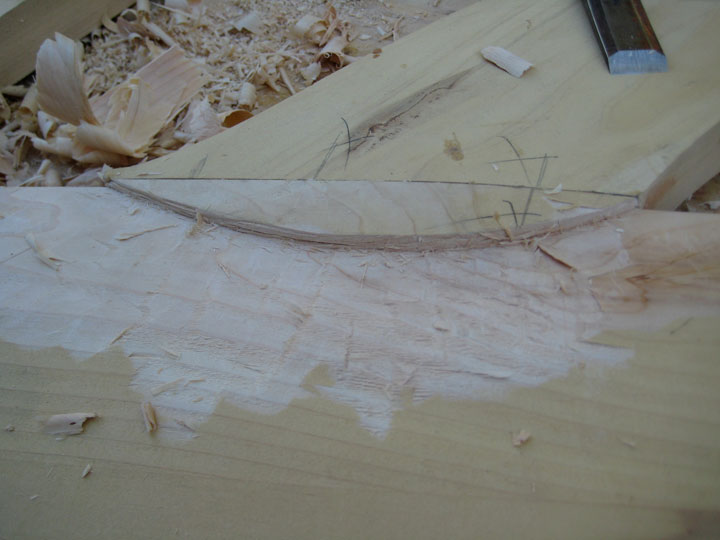 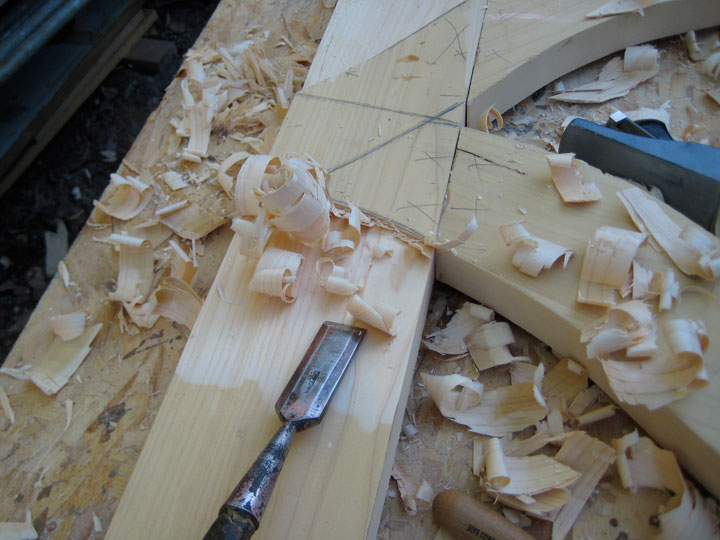 HOW TO BUILD THE WOOD GATE #204–PROGRESS

Jumping forward to the finished product.  The secondary limbs are of Ipe,  a dark, dense, resistant species from Brazil almost impossible to find as a certified offering. The vast vast majority of this currently popular wood is being harvested and exported without regard to the environment or the indigenous populations it impacts. There is simply not enough manpower or resources to enforce the laws of an area so vast as the Amazon Basin, which has changed so dramatically since Charles was there in the mid-70’s. At that time, there was only a single partial dirt road being cut through the jungle known as the BR-1. Today a miasma of logging roads like spider webs, with a loss of the rain forest at a rate that boggles the mind. Much of it driven by an American demand for products such as Ipe, impervious to how it was harvested or how those methods are impacting the largest rain forest in the world.

So we went to some extremes to find a rare source of certified Ipe, costing about three times the going rate. 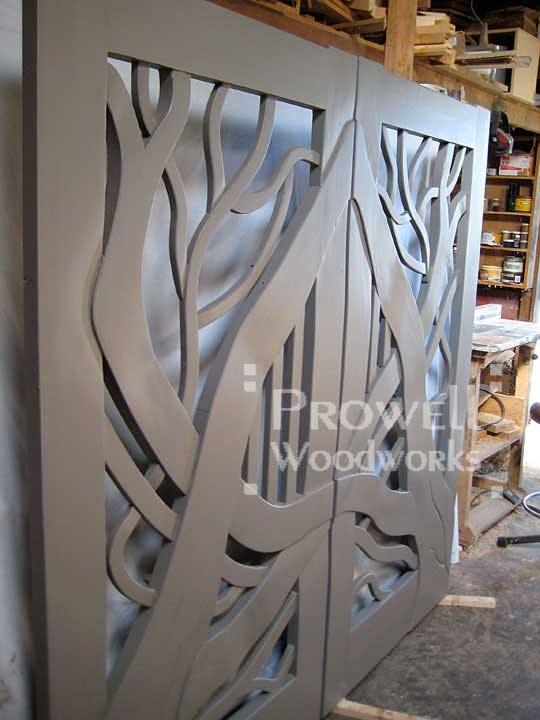