Prowell’s articles have appeared in Fine Woodworking, Fine Home building, Woodwork, Old House Journal, and This Old House, among others.

Not the most poetic title, but it does get to the point and one of the more common concerns of those purchasing Prowell’s Garden Gates and Fence Panels, as well as the host of other products.

But how do we govern our claims with anything beyond silvery rhetoric? We can look to the logic of how it’s built and the experience of what was brought to the table in developing the products themselves. The obvious assumptions of anything assembled with the proper joinery being ultimately more stable and more structurally sound. Or the selection of the materials specified from the mill far above what is available in a retail lumber yard and drawn again from experience that teaches us how older trees are more stable and less reactive and vertical grain is more predictable, and how a moisture level of between 4% to 9% is absolutely necessary to anything relying on joinery.

But in the end, it’s just rhetoric. What to the layman or homeowner can be confusing and conflicting and for those without the time or acumen to research the data to the level of a professional knowledge really know?

The novelist John Irving was once asked regarding the release of the film version of his best selling Garp if he was concerned the film might not represent the novel in the best light. In other words, if the film was a bad film and the associations would trickle down to damage the standing of the book. His answer is a truism to so many: “Settle on the right director and move on.”

So how do we find such a director? How do we know that what he tells us is true? Finding a good dentist when we know little to nothing between good dentistry and poor dentistry? A good attorney, or accountant, and on and on. Do we move solely on the price of their services and assume the more costly practitioners are the better practitioners? Do we network and act on the referrals and advise of our neighbors, friends and acquaintances?

Perhaps the most straightforward approach, beyond the corroborating evidence presented throughout the 800 pages of this web site can be found in the following examples, comparing the photograph taken during installation and then again, many years later: The earliest proving grounds were within the Bay Area, as well as the most accessible for follow up visits.

In 1995, Prowell Woodworks was hired to provide a series of fence panels and gate for a residence on Yulupa St in Santa Rosa, CA. A rare local commission, by a wonderful couple who have long ago sold their home and moved on. Recently, Charles was returning from the golf course and crossed Yulupa and recalled a vague memory of the commission. He explored the street by car and couldn’t find the site. he returned again months later on a bike and canvassed the circular stretch of the same street and eventually found the site in an almost unrecognizable state; the trees and hedges had fully matured and established themselves such that the property appeared greatly changed.

But the fence and gate remained. On foot, he approached the work, now some 21 years after the installation, to support the same findings whenever he happens onto a site drawn from a distant memory of an earlier commission.
Spring 1996. 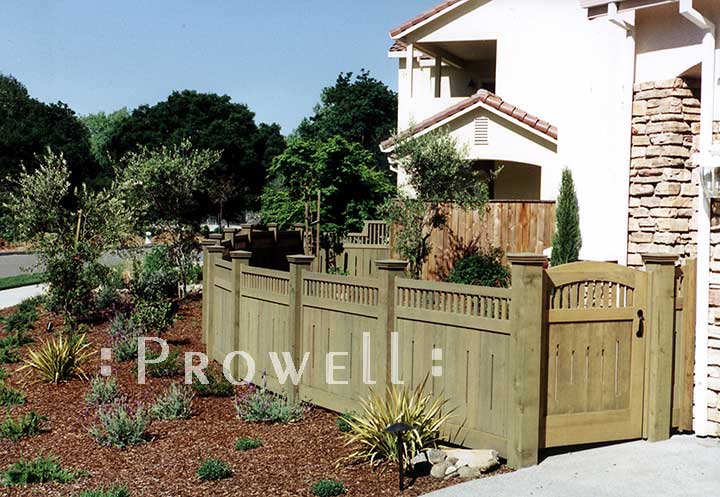 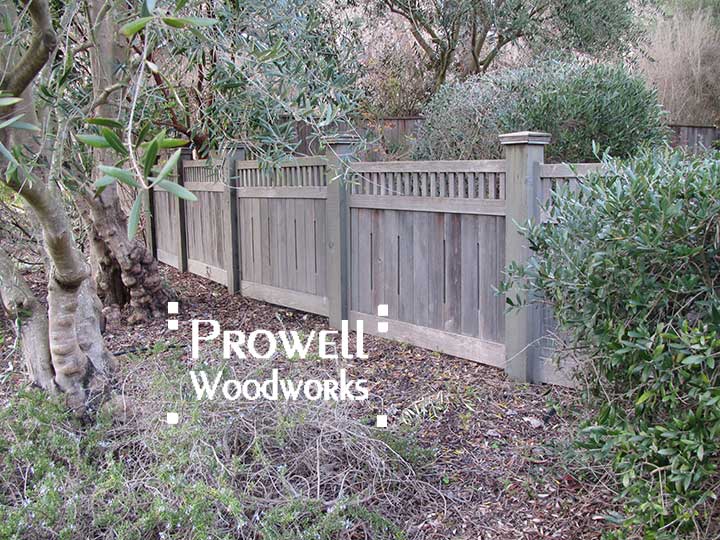 There are no joint separations or cracking or delaminations or bowing,warping, or cupping. There is evidence of dried algae, or a harmless fungus settled on the top edge of the middle horizontal rail, which shows us that the fungus had no interest in penetrating into the fiber of the resistant tanning of the cedar. 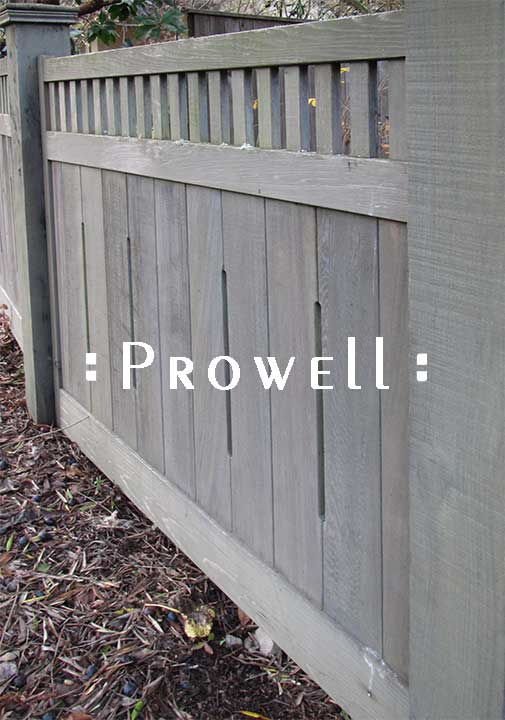 A front fenceline and double entry gates installed in 1998 in Marin Count, CA. Finished at installation with a solid-body olive stain. In 2022, we received the below photo, which appears in nearly identical condition to when the panels were first installed. The solid-body stain has been beautifully maintained over the years. (With solid-body stains, if you neglect the maintenance schedule, the result is peeling and cracking that requires scraping and sanding prior to re-finishing.  Solid-body stains are durable and long-lasting, and flexible enough to breath with the cedar over the seasons . . . but their required maintenance every 7-10 years cannot be ignored. 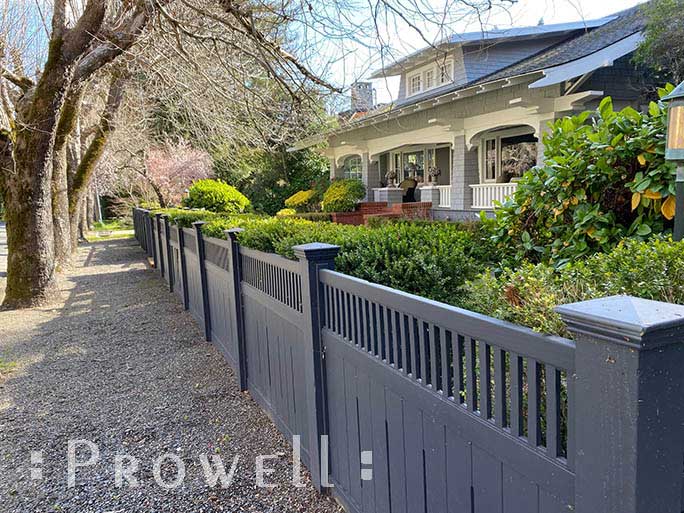 Had the fence and gate been finished with a paint or solid-body stain, or any varnish-like application featuring the luster of a top coat–think wooden boats–and the maintenance ignored, the present-day appearance would be a less appealing aesthetic. The fence and gate themselves would be fine, but the peeling and cracking finish itself would upstage the fence the same way it would a house that has been ignored. Paints and Solid-Body stains will provide an 8 yr +_ timeline and require that that timeline not be ignored. Exterior varnishes, such as Marine Spar Varnish, or any two-part application such as Sikkens, will provide 2-3 years if not subject to the direct sunlight and much less if exposed to the direct sunlight . . . and if ignored, a ghastly result of initial checking and flaking, followed by peeling, with the end result requiring scraping and sanding prep prior to re-finishing.

A WoodRX ‘Ultra’ finish–our preferred product–discussed under the Pre-Finish Options, will provide a 7-8 yr timeline. Two sprayed coats for a slightly waxy, low sheen, wipeable result. If ignored, it will simply weather gradually to a consistent gray.
To reiterate: Those host of products that mention Urethane, Varathane, Spar Varnish, Oil, Teak Oil are for those of you willing to summon the same TLC for your fence as those who own a fully restored Chris Craft motor boat. A lifetime commitment.

Clear water repellent finishes are quite truthfully a complete waste of time. They last less than a year and serve no purpose whatsoever.

There is no need to seal a Prowell Fence or Gate or any of our products from the absorption of moisture unless you prefer a color or tint or patina that suits the setting of your landscape and architecture. This is fine. Quite fine. But you mustn’t become lazy or lose interest. And when many of you sell and move on and the new owners ignore the maintenance, we’re left with an unsightly appearance recognized by passers-by as a Prowell product with a revolting case of bad acne.

The below gates, style #76, were installed in 2007. They were refinished in the summer of 2021, and once again looking as new as the day they arrived on site 14 years earlier. 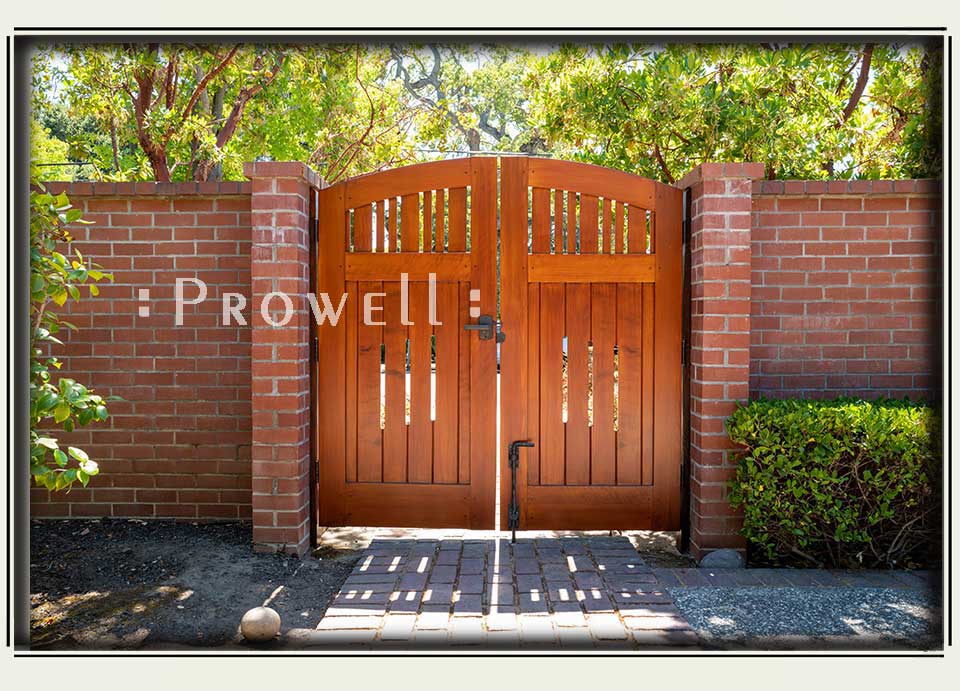 The below gate was built in 2003 as only the 2nd offering of style #79. It was returned to the shop in late August of 2020 with a request to repair the upper pattern. 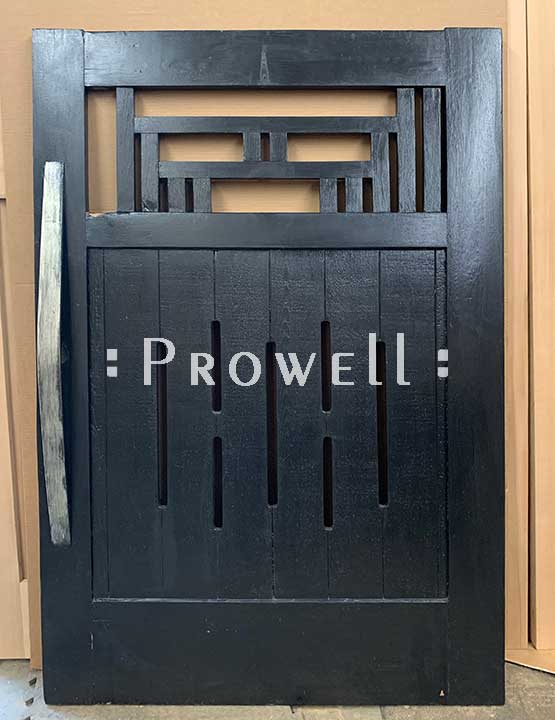 A missing picket, and multiple coats of paint that have collected over the years. To point out the number of improvements and structural developments the gates have undergone since 2003 would become a treatise. 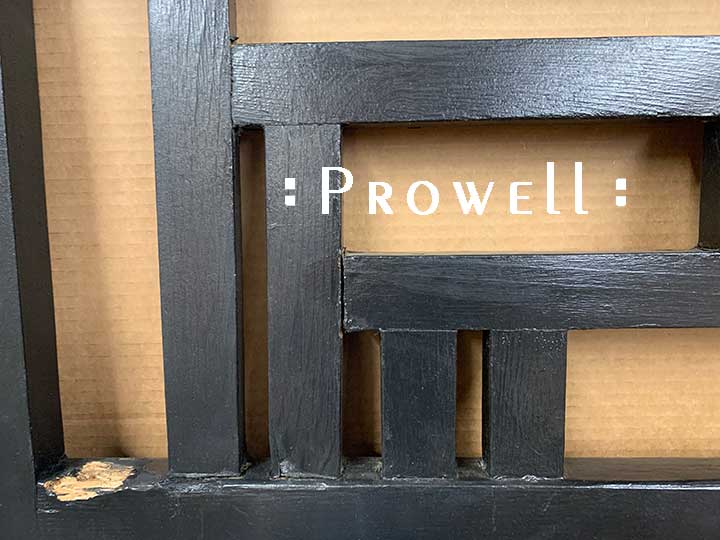 The below photographs were sent to us in March of 2018. The project and installation date was 2003. The products were allowed to weather to a natural gray. No finish was ever applied. 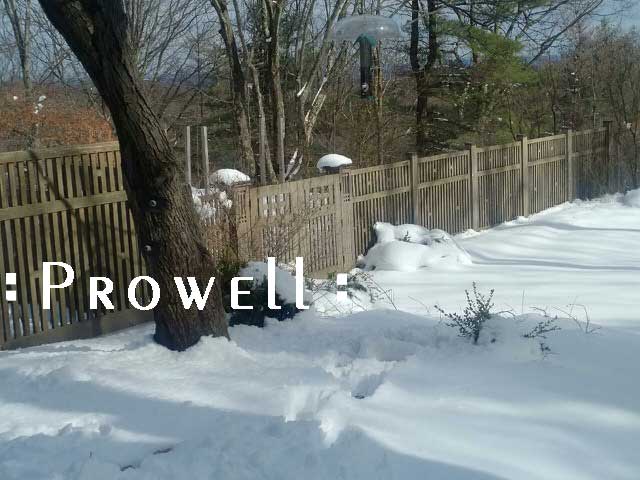 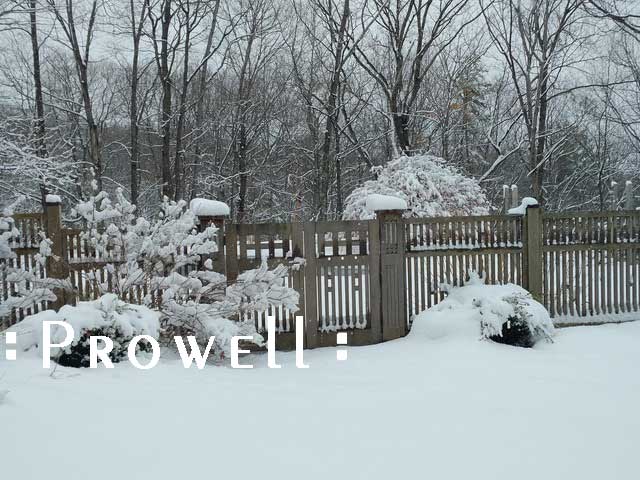 The original Garden Fence Style #9 was created in 1995 for a couple in Oakland, CA. Appearing on the site to this day and the catalyst for one of our most popular fence styles. Both the entry and driveway gates have not enjoyed the same interest, in part because they were designed specific to the geometry of a front and visible window on the original home. A window that may to many seem a little too unique. And yet they remain among the available products because Charles and Ben love the pattern.

1995: The original. Finished with a solid-body Cabot Stain ‘Alabaster.’ 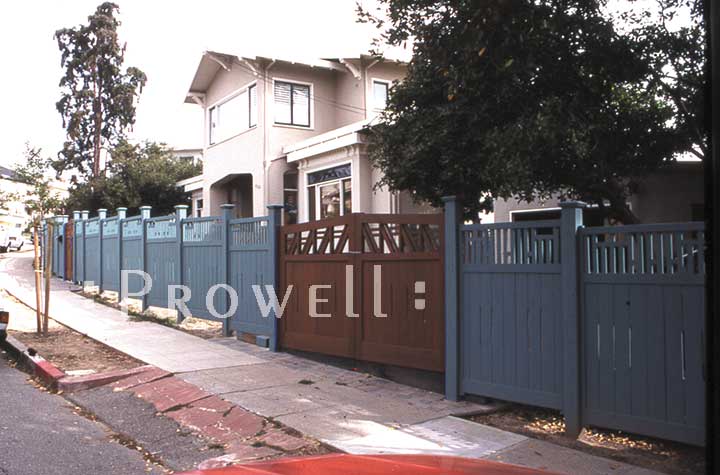 Rediscovered in May 2013 while having dinner across the street at a Peruvian restaurant to celebrate Charles’ oldest son, Sam, completing his graduate studies at Berkeley. Sam parked the car and arrived at the restaurant with a photo on his iphone of this fence a few homes away and recognizing it as something his dad and brother would have built. An investigation leads to the following photos, showing panels and gates that show no wear whatsoever. A new color for the fence, and something very new for the gates.
* The original inspiration for the gate patterns can be seen in the window just above the gates. 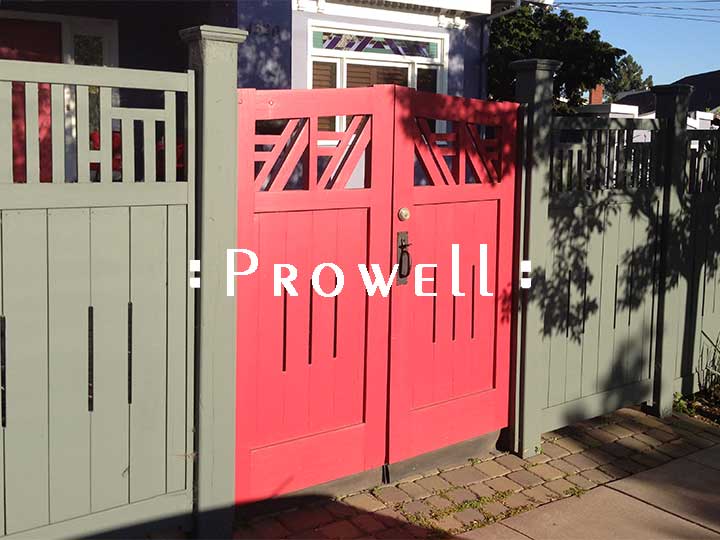 Mr Chihuahua on the prowl. 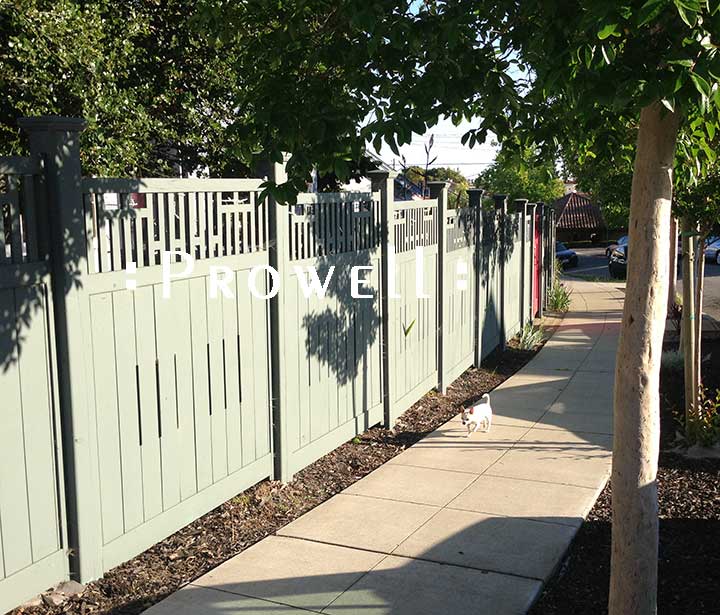 The original Garden Gate Style #70 was created in 1998 for a residence in San Francisco. Along with 5 additional gate designs and a series of open grid fence panels–none of which can be seen in this photo. Revisiting the site recently (Fall 2017) for the first time since the original installation results in a few photos illustrating virtually no structural or aesthetic wear whatsoever.

The residence. The front shorter gate barely visible on the lower right is the original Gate Style #77-1. 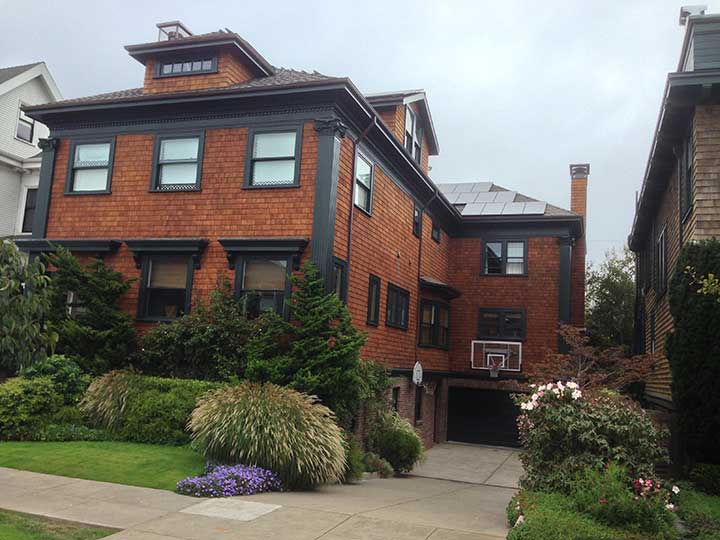 The 1998 photo on the left. The 2017 photo on the right. All joints are as tight as the day they were created. No checks, cracks, warping, bowing, or cupping.

There was never a finish applied to the gates or panels on this property. 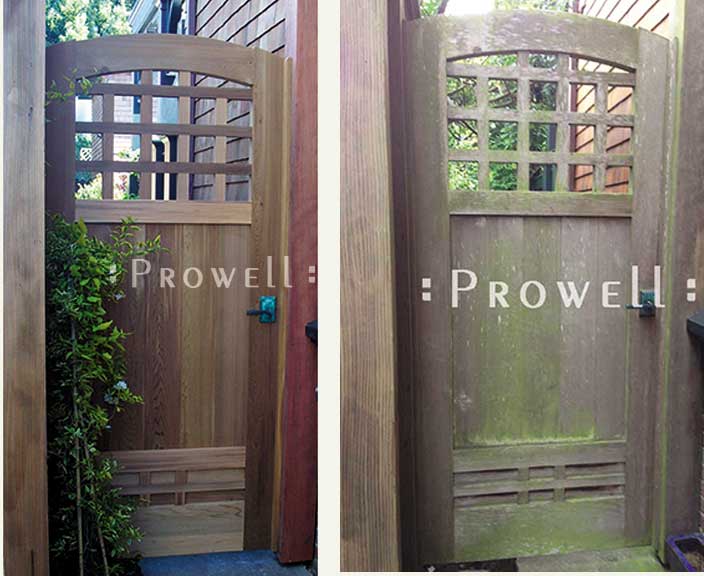 The narrow drive gate on the left was commissioned by the neighbors at the same time, and revisited here in 2017. 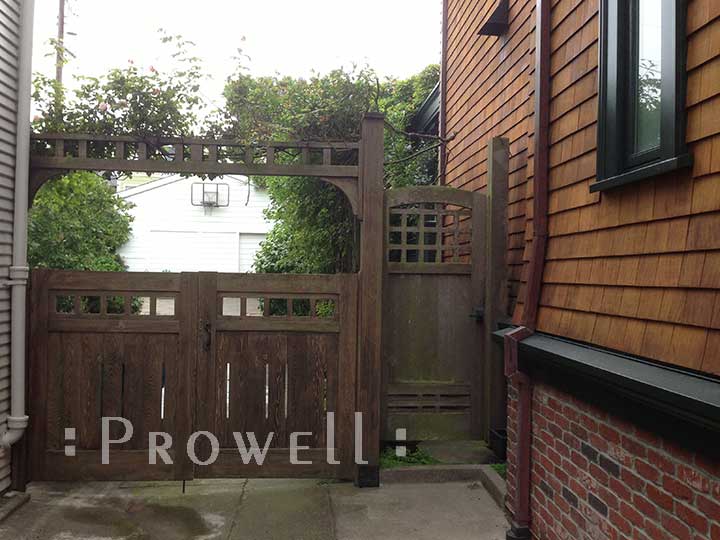 The original installation photographed in 2002. 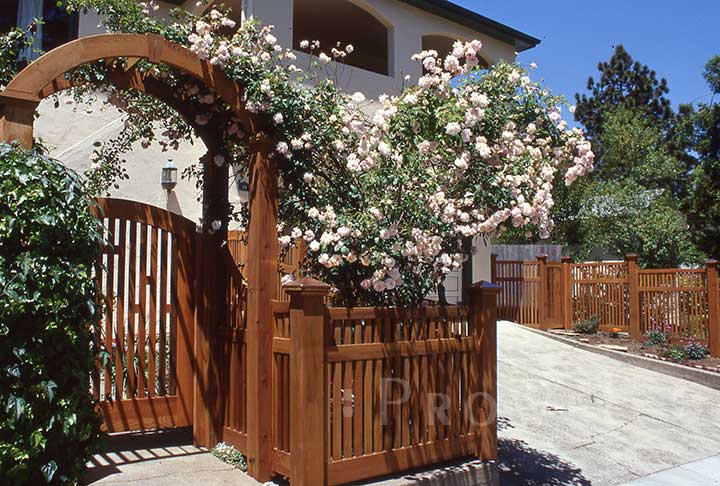 Photographed 15 years later, with the penetrating stained finish long weathered away and the copper caps oxidized to a vertigo patina. 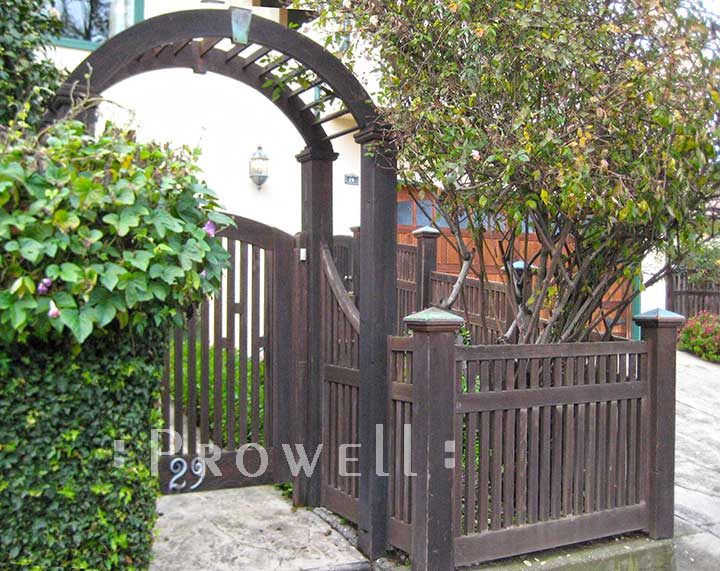 The original installation photographed in.

Photographed in January 2017. Once again the matured landscape makes it hard to recognize, but the only change in the fence itself is the weathered finish. 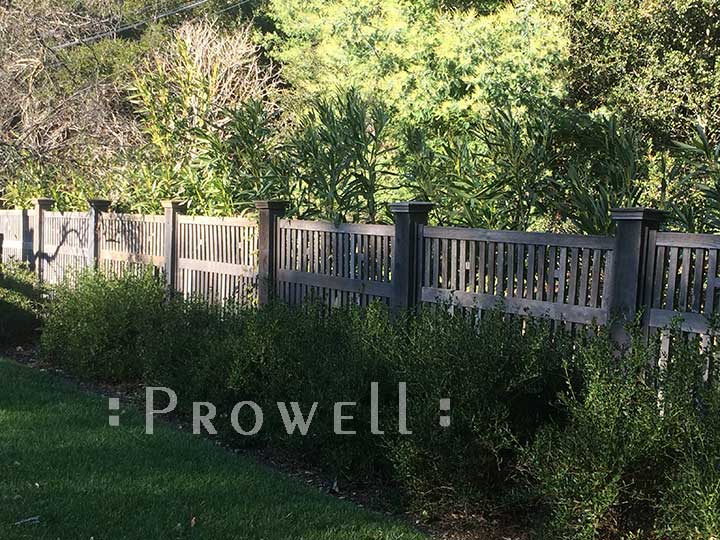 What is the gate’s worst enemy? Hurricanes resulting in century-old trees falling with the calamity of a wayward meteorite. 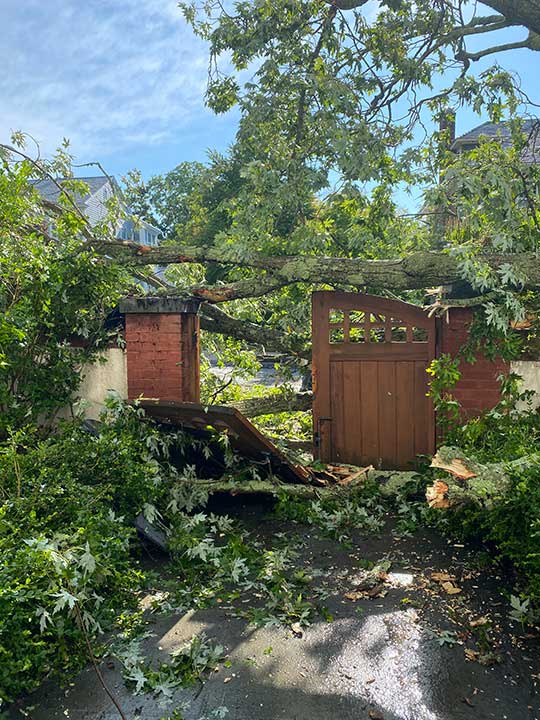 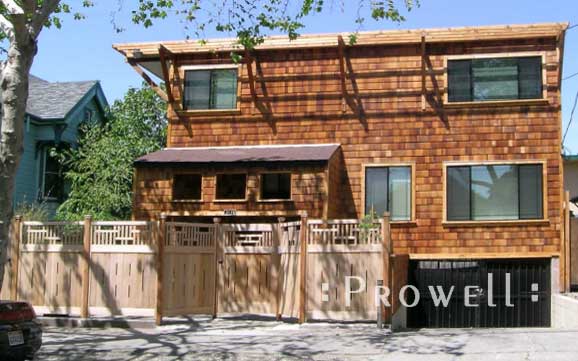 Coming upon this site by accident while in Berkely, 16 years later. 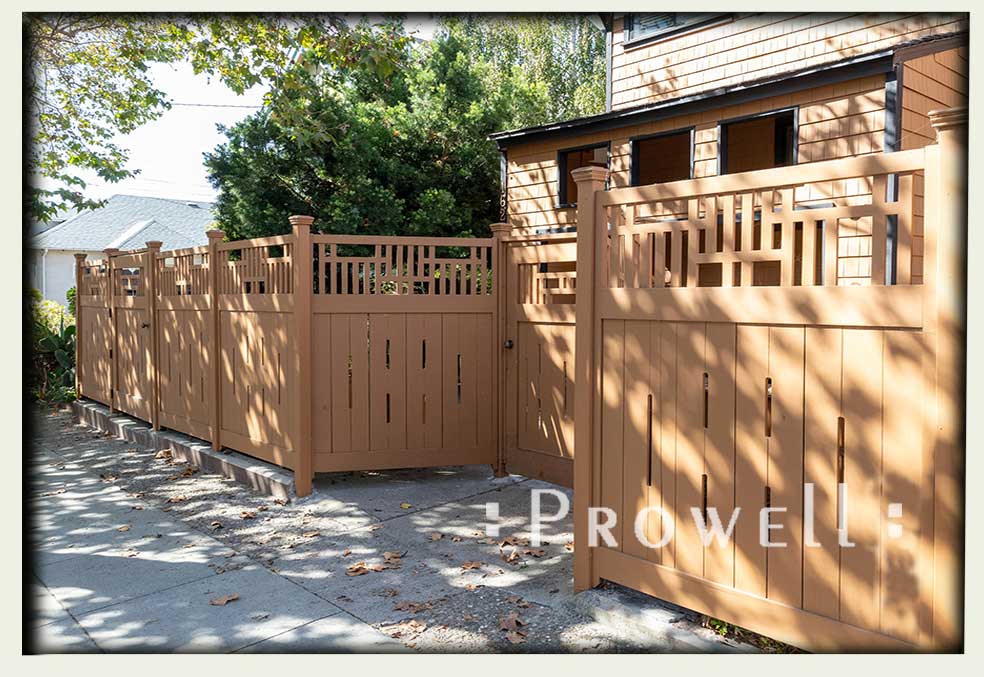