FENCE PANELS
* Prowell Woodworks is a product-based company. We are not available for site visits.

Printed Installation Guides and Working Drawings arrive with all shipped or delivered orders.

The workmanship involved with Prowell’s Fence Panels merits some attention to the installation. A few aspects below that will hopefully answer any uncertainties you have regarding both the product itself, and what’s required of the installer.

The actual installation goes quick enough to catch your neighbors by surprise, soliciting a quota of kudos to both you, your installers, and lastly, possibly, the Prowell outfit.

The link on the left margins,”Setting Your Post” makes not only for good reading, but the extremely important role of setting the posts to our specifications, whether you’re in the fetid humidity of Georgia or the kinder temperance of San Francisco. It will result in posts that last 30-40 years. If this process is ignored, the weakest link to your new fence will be the rotting posts. Replacing rotted posts to an otherwise structurally sound fence is no small task. So below is a simple graphic worth pondering.

The Post Page also discusses the wood species for posts, listing the advantages and disadvantages of each culled from nearly 50 years of experience setting thousands of fence posts in every corner of the country. 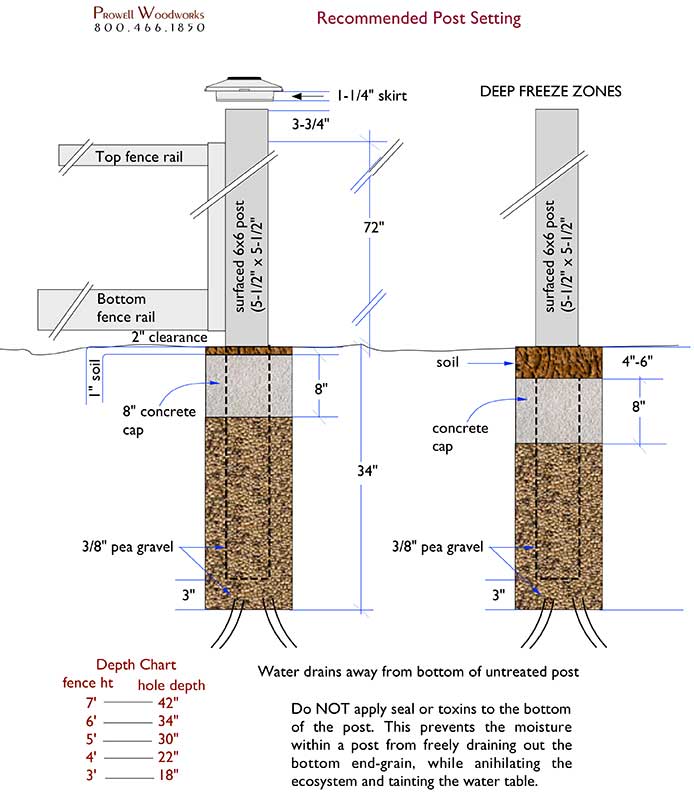 Below we see the end-grain of typical post prematurely harvested. The growth rings are separated by possibly 1/4″ to 3/8″. The fiber between each ring is essentially baby fat. Fatty tissue that is immature and prone to the infestation of bacteria (Fungus, rot). 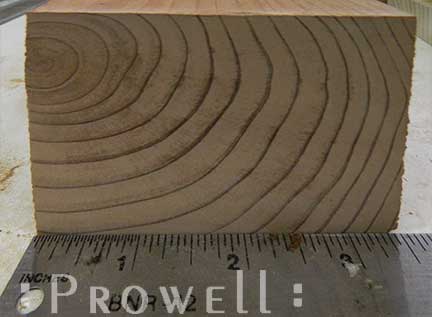 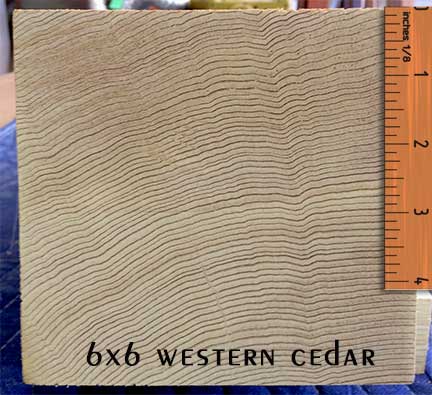 Working down the line in Bethesda, MD. Following the string-line along a given run, the holes are dig as each post and panel is set. Once the run is finished, the post placements are nudged with a digging bar, shifting the pea gravel, to align to the string-line before the final cap of concrete is poured in place. Whether it’s a hand posthole tool, or an auger, this is the procedure most often followed. 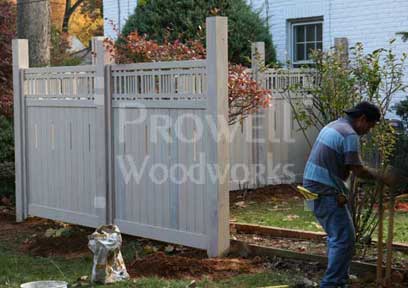 Below is an example of a typical layout for an extended fence-line. Sent in as a hand-drawn sketch or anything that allows us to separate the various sections and calculate an index of how many panels per section, and their net widths.
Among the links on the left-margin is ‘Example Layout’. It describes how to calculate the number of panels per a given run, as well as the net widths. 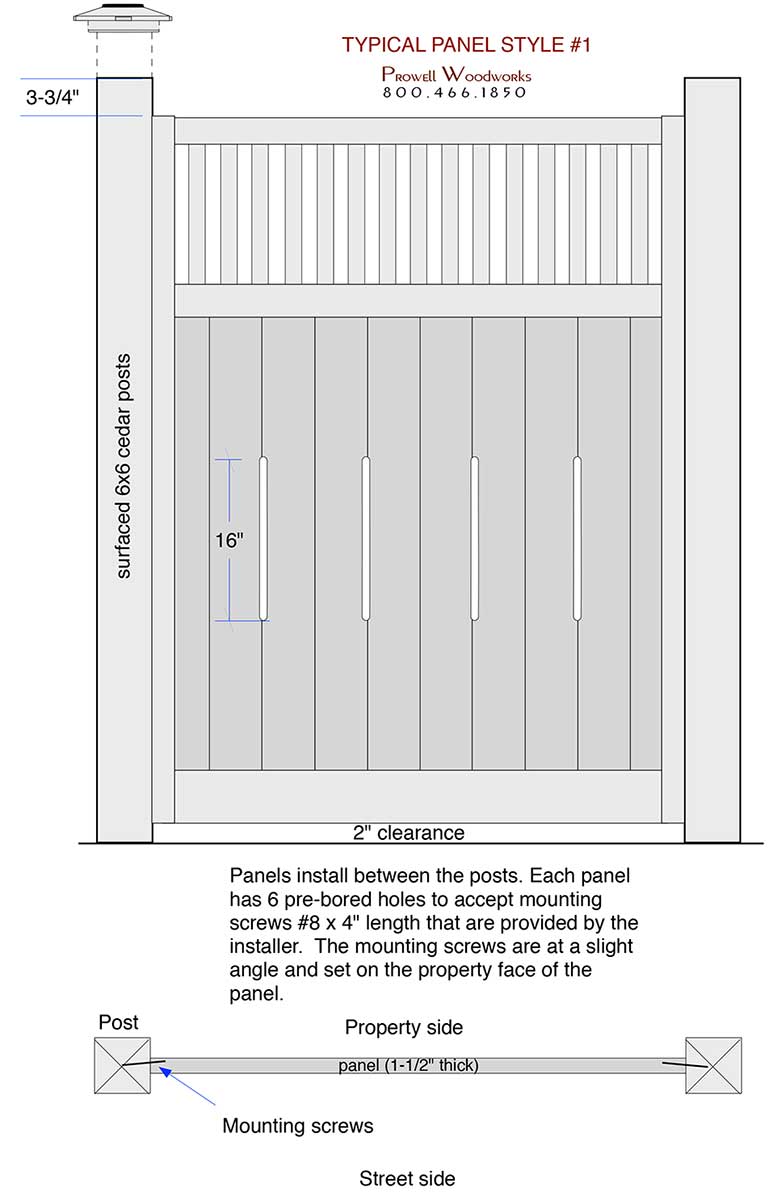 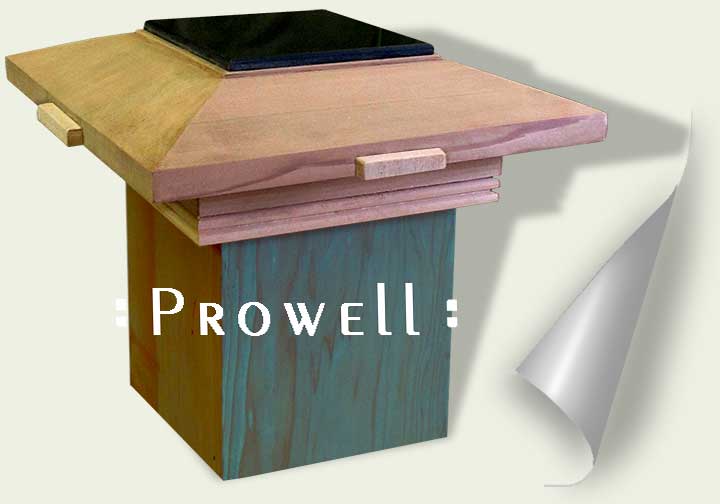 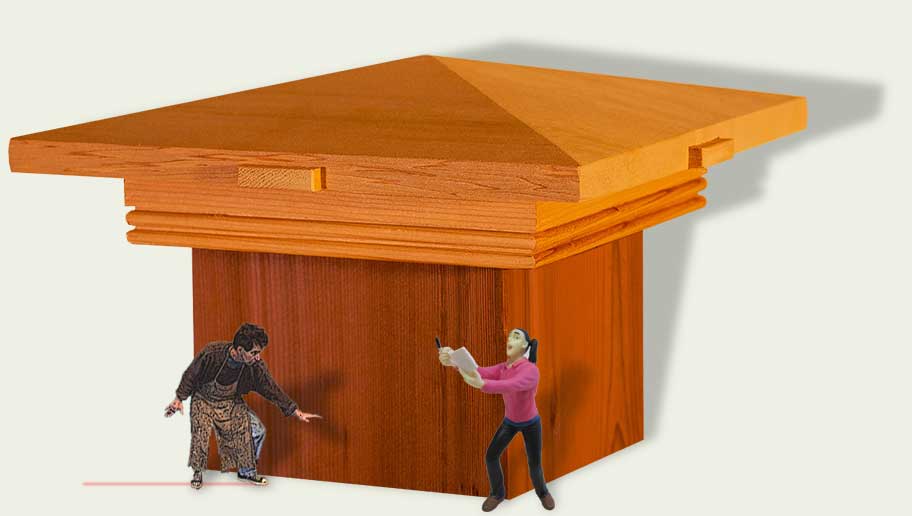 The original Prowell Fence Panel. The methodology for the fence panels debuted in 1996 and were consequently featured in a flurry of publication from Fine Homebuilding to Sunset Magazine. For several years when sales were still relegated to the San Francisco Bay Area, Charles(and young Ben) installed each and every commission. Once a procedure was established, the Step-by-Step Installation Guide was created and this aspect of the product was left to 3rd party installers and homeowners. 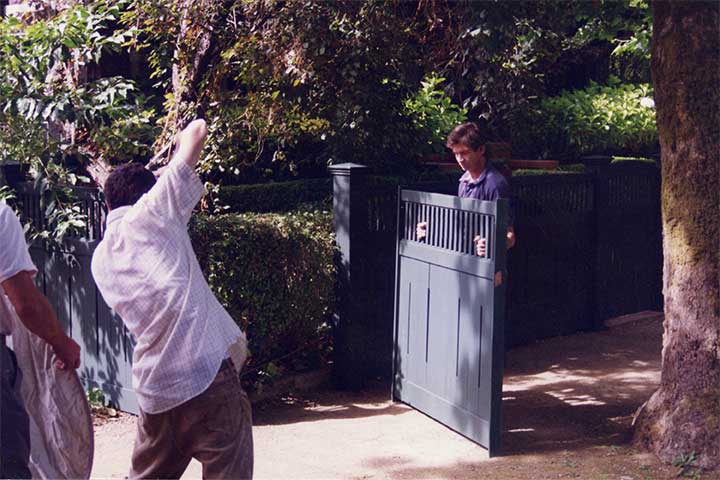 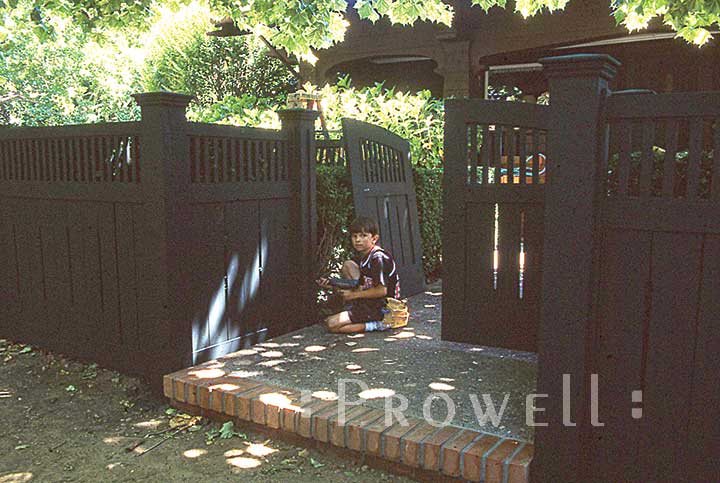 Brian Van Rheenan illustrating how the panels are easily installed between the posts Brian and his crew have been managing our local installations for more than a dozen years. 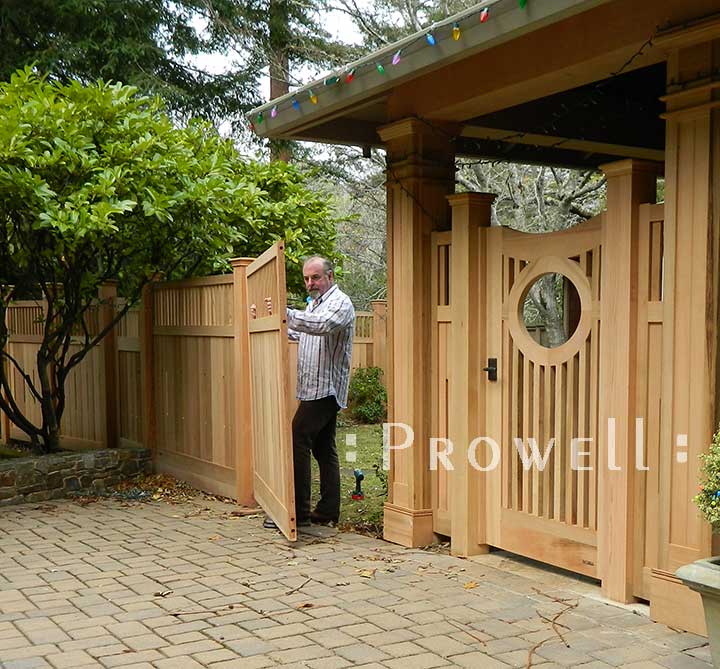 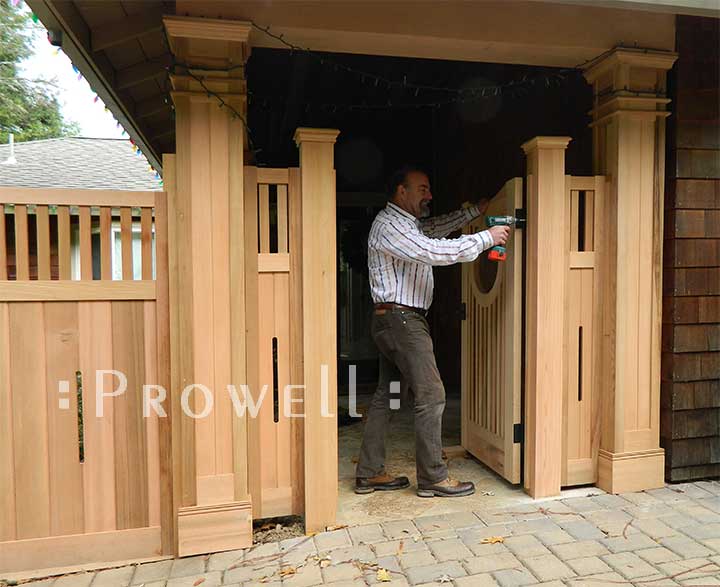 Not your typical off-the-shelf tongue and groove plank. The solid panels are individual planks milled specifically to provide the maximum surface mating mass.
The result is a glued up floating slab that freely expands and contracts from season to season. 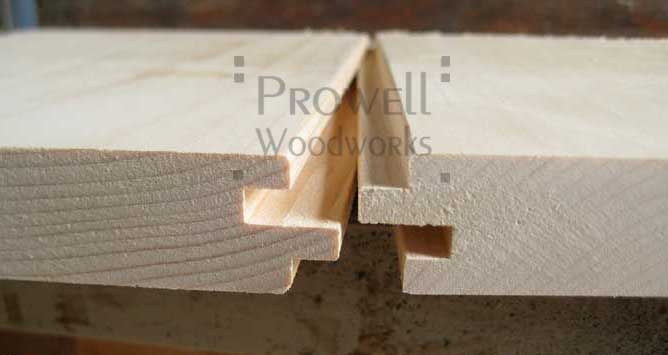 For those panels utilized to wrap and conceal unsightly UVAC utilities, the Lift-Off Panel offers a convenient alternative to the cost of a seldom-used gate.
On the inside face of the panel, a series of mitered blocks supports the panel such that it can be lifted away for access. The Blocks marked ‘A’ below arrive mounted to the panel. The blocks marked ‘B’ are to be mounted to the posts. The net width of the panels are built 1/4″ less than the opening between posts to allow for normal expansion during the wet season. A typical panel for this use weighs about 45 pounds. 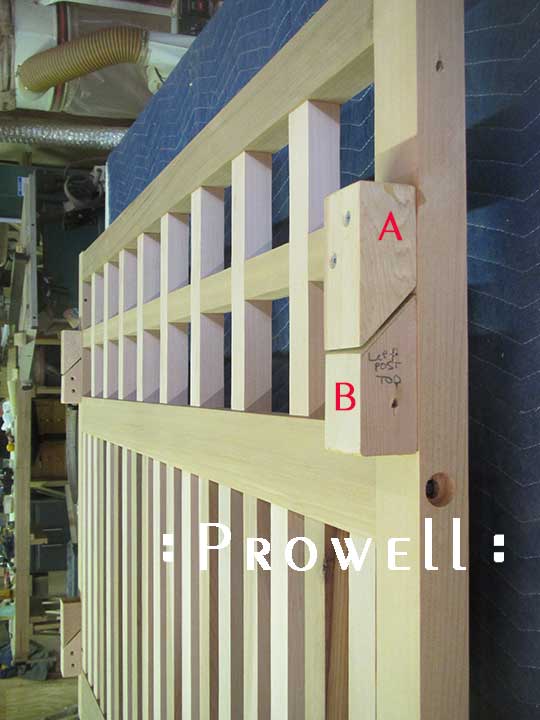 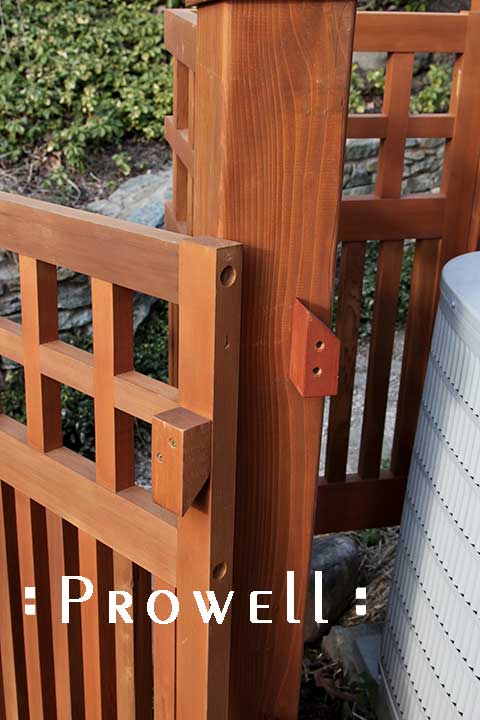 Fence Style #22 below illustrates the aesthetics of our Cantilevered Corner. Utilizing a system of joints that insures the panel will not sag, it offers nothing more than a visual diversion that departs from every corner fence-line ever built.
Limited to a maximum of 24″ x 24″.

More information at the link on the upper left margin, or click the image below.

There are numerous examples on the web site where the HVAC units are enclosed with solid panels and an access gate. All of which adds to the existing architectural mass of the house. After decades of these orders from all of those with central air conditioning, we eventually addressed the need with a design layout that eliminates the cost of a little used gate, as well as reducing the posts from six to four. Coupled with the more open exposure of the pickets and upper grids, we add a more lightly designed footprint to the existing architecture.

Two Cantilever Corners used on both ends.
A height off the grade of only 46″
A center Lift-Off Panel 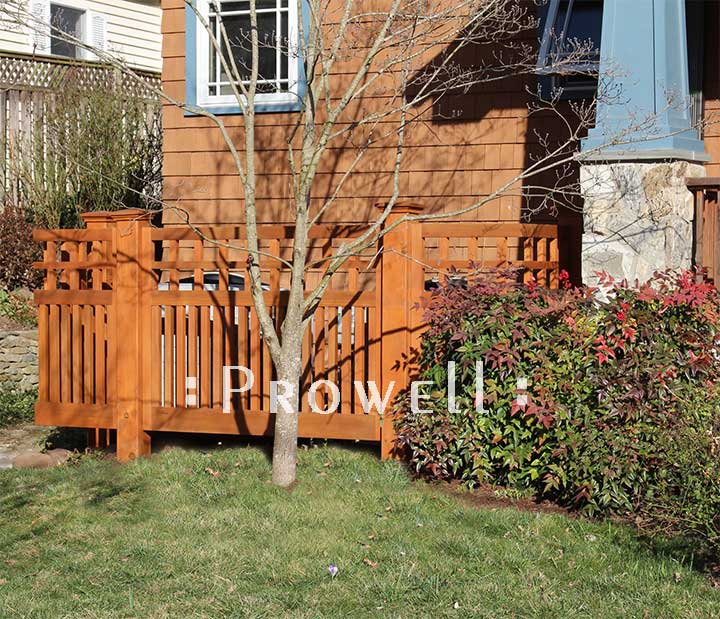 The optional Gable Cap. Available on all panels as an aesthetic feature that also adds to the overall rigidity. 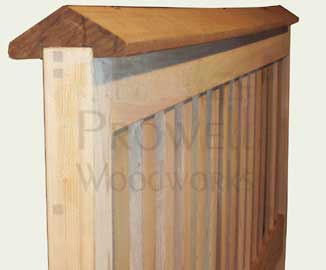 Reducing the spacing to 3/4″ allows a more private enclosure while maintaining the basic elements of design. Standing more than 5 degrees off center and the visibility between any picket spacing is eliminated. 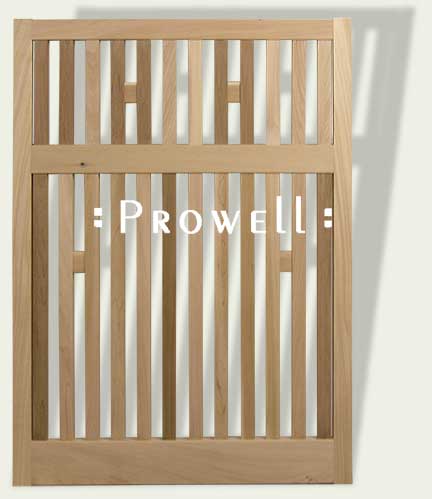 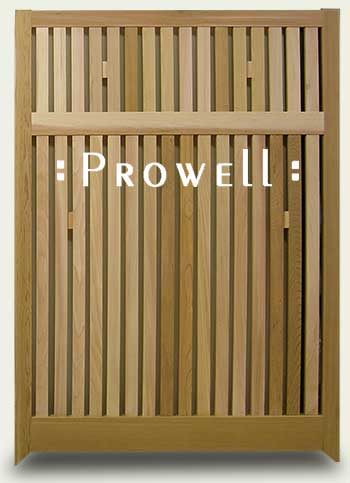 LEFT:
The panel to the right of the gate climbs up a the sloping grde while maintaining the levelalignment across top.

RIGHT :
A long continuous slope where the panels are built ‘on the bias’ 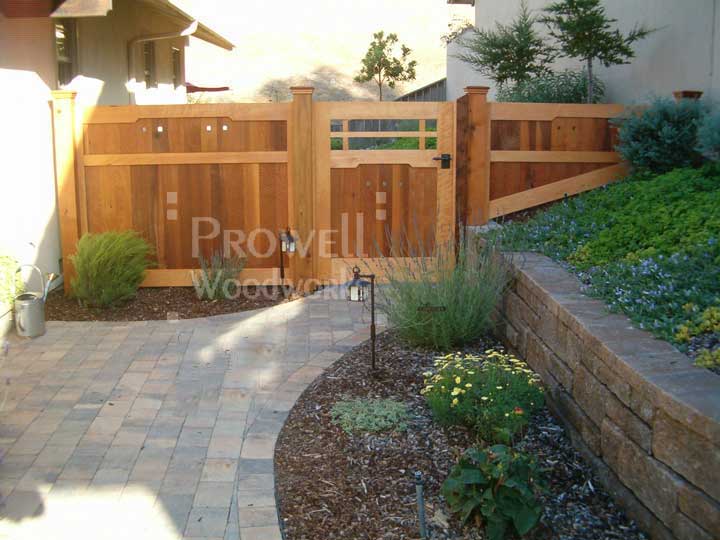 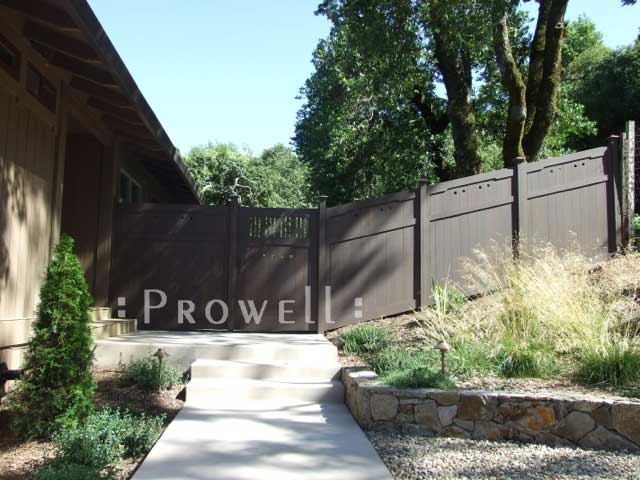 LEFT:
Changes in the site elevation can require transitions within the same fenceline.

RIGHT :
A series of panels stepping along a continuous slope. Each step is equal. 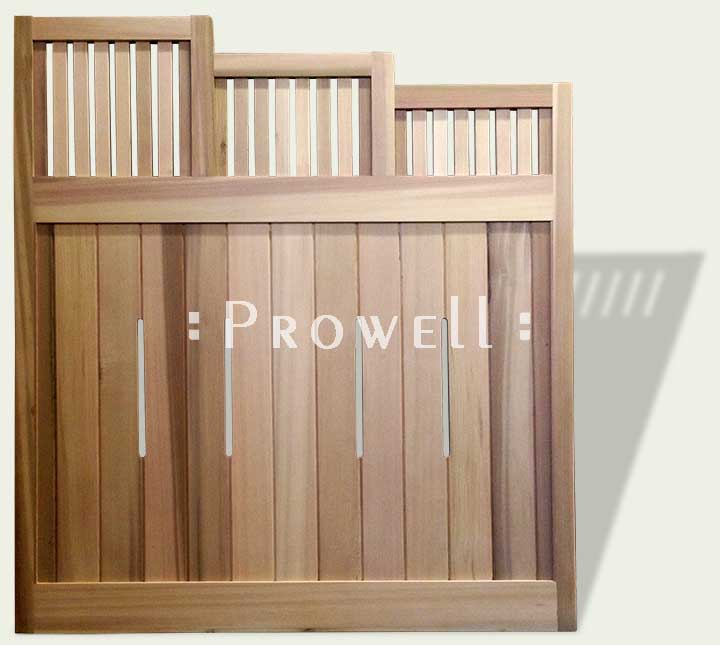 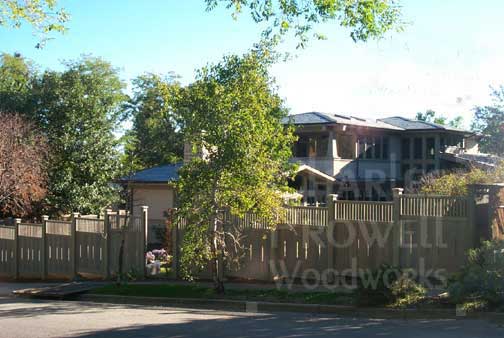 An example of setting the panel too close to the grade, inviting bacteria to set up house along the bottom rail.
The panels are spec’d for a 2″ clearance between the grade and the panel. And although it’s cedar and one of the most resistant species to bacteria and fungus, why tempt a starving ecosystem? 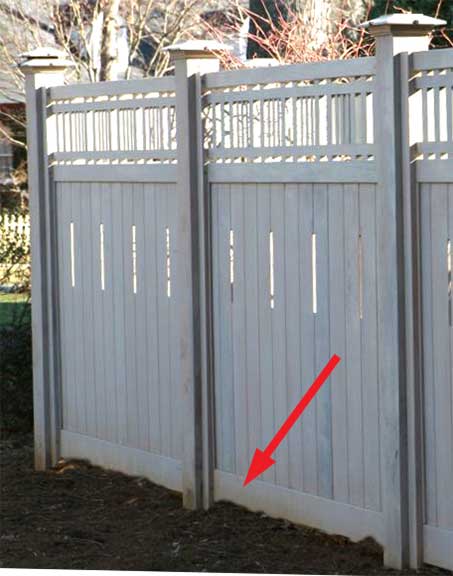 Not a fence panel, but we’ve included it here as a shocking reminder to take your time, read your level twice, and if you’re in Georgia, as these folks, be mindful of what you add to your morning coffee. 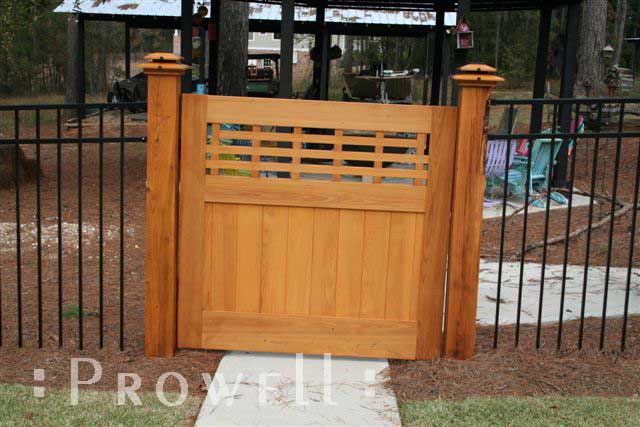 The below image represents something called “cathedraling”. When figured grain is oriented upwards, and a paint or solid body stain has been applied prior to shipping, gravitating moisture can lift the grain. Shortly after, we switched to a vertical grain grade of cedar and the problem was eliminated forever.

Why? The cedar is genetically coded for the climates of the Pacific Northwest. It ships to the Prowell shop with a similar climate, as well as the protection of being inventoried in the shop. When it finally ships, to say Washington DC, in August, the cedar must acclimate to the change in climate. For the first several weeks it expands in a reaction to the new, humid climate. If it had been finished with a non-flexible finish, such as paint, the paint is unable to swell at the same rate for those first few weeks and we can potentially see the below result.

For this reason we do not offer pre-finishes in paint or solid body stains nor any finish that includes an inflexible ingredient.

See Pre-Finish Options for a full description of approved finishes. 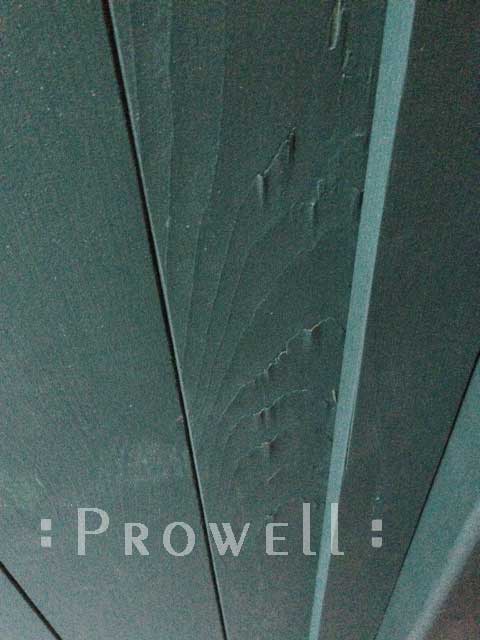 Once the fence panels are finished, the solid floating insert panel may shrink slightly in the warmer, drier months and create a reveal that exposes raw unfinished wood. Your solution is to simply touch this up with the extra finish you saved in your garage. Come the wet season and the panel will swell and the reveal will be hidden. Below, the grain direction of the insert panel is horizontal. Wood will change dimensionally perpendicular to the grain. 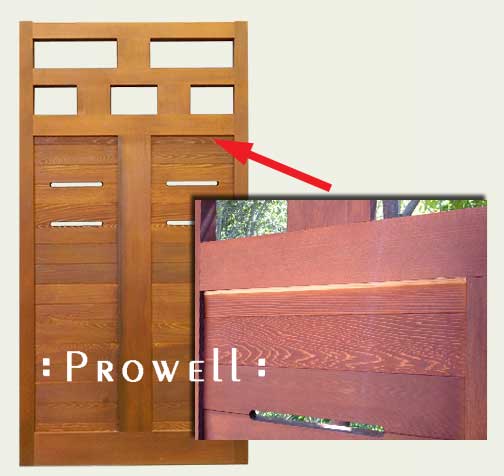 Your Content Goes HereTypical posts for the Pony Panels, shipped with threaded rod that seats into corresponding bores in the top of the wall. 3″ x 3″ x 24-1/2″ ht. 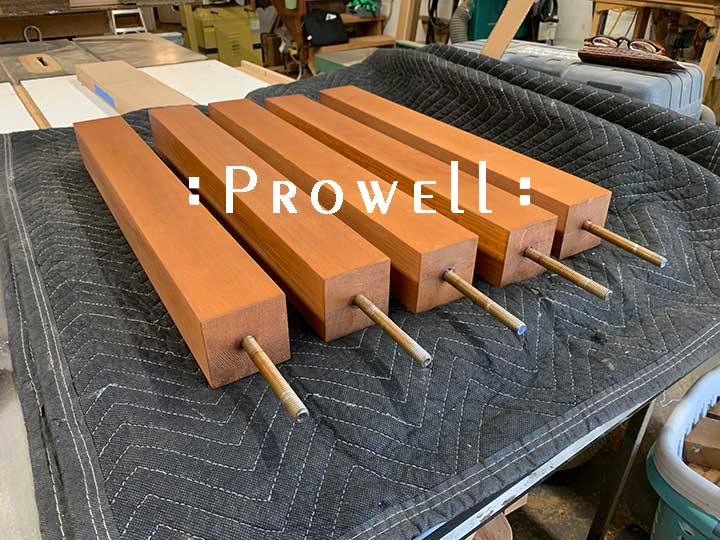