A few of the woodworking tools inherited by Charles and Ben Prowell.

One of the older tools inherited by Charles. Kept in it’s original box on a shelf in the library of his home. This tool was officially retired a few decades ago, at about the time someone visited the shop and appeared surprised to see the rare tool. And shocked that it was a working tool in a working shop. They mentioned its value, and the next day it was retired to the library.

It’s history is confusing. Charles’ father died at 28, in 1955, when Charles was short of his 6th birthday. His mother remarried, to the carpenter George Glenn, whose own father, Wyman, was a part-time furniture-maker with a fully equipped shop in Champaign, Illinois. It was this shop that first ignited Charles’ interest in woodworking, and his step-father’s job sites as a custom home builder that first ignited an interest in structures.

Wyman’s father is an unknown. The name embossed on the original case for the Stanley level is “C.E. Glenn.” But unfortunately there are no surviving members of that family. They are all gone, and consequently no distant aunt to ask the question: ‘Who was C.E. Glenn?’ Was it Wyman’s father? It would be a reasonable assumption, in that the level was patented in 1891 and the chronology would be about right, putting Wyman’s father as a working woodworker in the early 1900’s. We have a number of tools inherited from the same era, and by all accounts, it would seem that C.E. Glenn was a practicing woodworker. 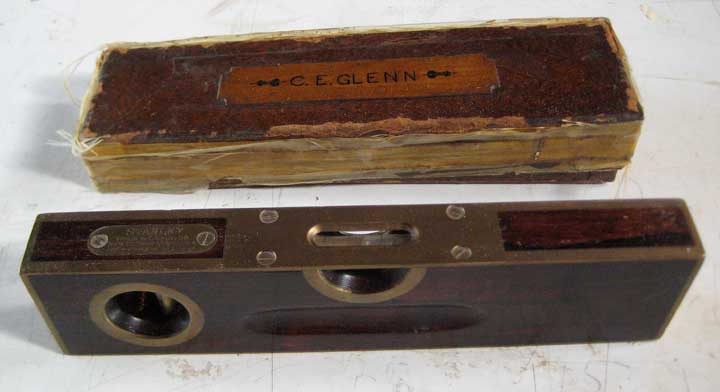 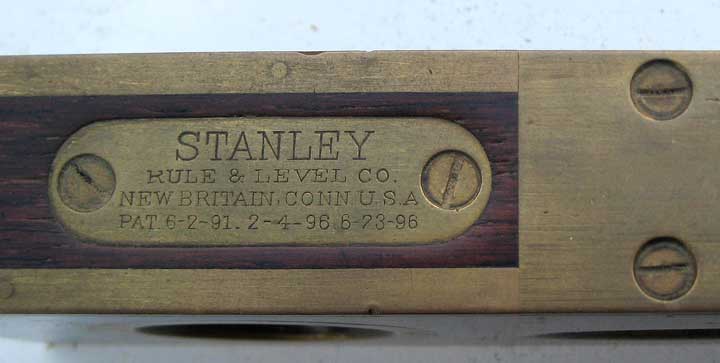 Recently, while at North Bennet St Woodworking school in Boston, Ben Prowell learned how to restore and care for planes. The sole has been trued. The cutter honed. The body cleaned and burnished.

A useful tool if, like Ben, you happen to be a woodworker who prefers hand joiner planes to a power shop joiner. 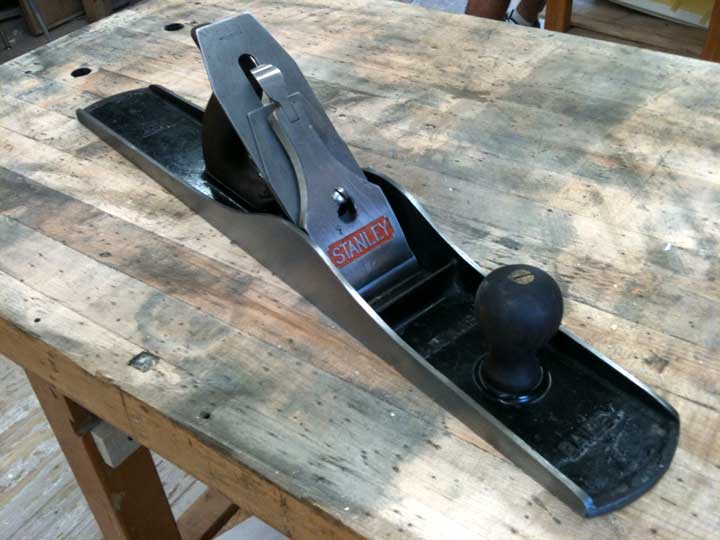 The Bailey stamp on the bed. Still the original blade, stamped “Made in USA.”. Rosewood knob. 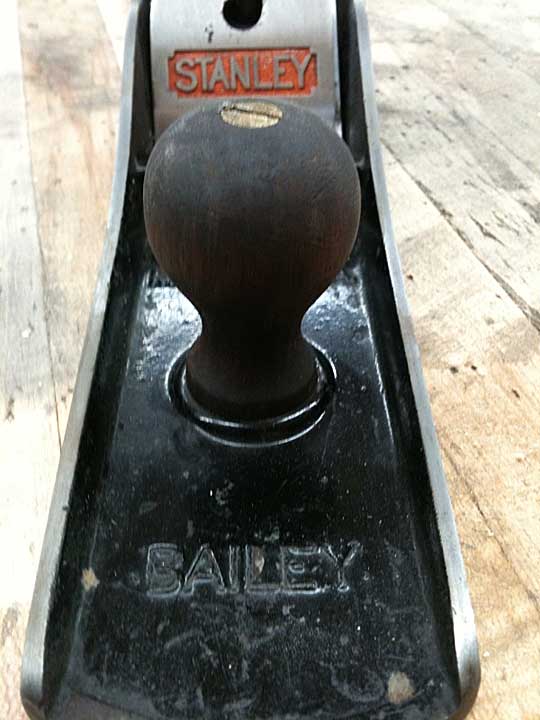 We don’t know how far back our rabbet plane goes. Charles grew up with it, and has used it heavily for 50 some years. It belonged to his step-father, but how far back within the lineage it went is a mystery. The only markings are the Made in USA, shown below. It also has a shoulder attachment, mounting to the threaded hole just below the red blade guard. We’d appreciate hearing from anyone who might have an insight into this tool.

A few of the many surviving drafting tools inherited from Charles’ mother–an illustrator / painter / draftsman–and her brother, Uncle Charley, a graduate in architecture at the University of Illinois. Uncle Charley passed away prematurely in 1949 and Charles’ mother –or Ben’s grandmother–followed in 2001. The tools eventually made up a portion of the drafting tools Charles had acquired and used while at at Southern Illinois University. Son Ben purchased a new set while at school in Boston. The originals below have been retired to the attic. 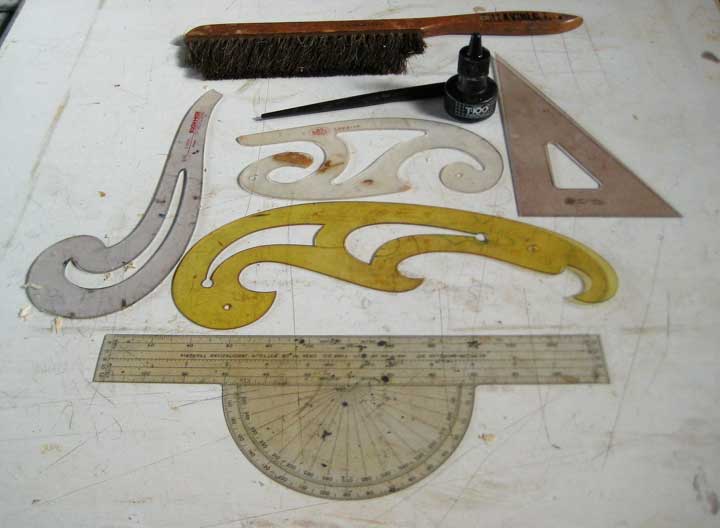 In the early 1990’s, Charles transitioned from the pleasant pastime of the drafting board, to the more practical format of CAD drawings. 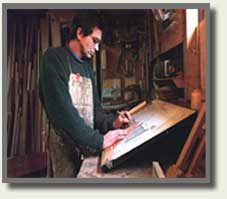 Used regularly in the shop until recently, when one of the complex hinges broke clean. Solid brass joints. Circa late 19th or early 20th century.

A few tools that Charles first began using about the 6th grade, and that remain in use to this day (with the exception of the Yankee screwdrivers, which became obsolete with the advent of the battery power drivers.) 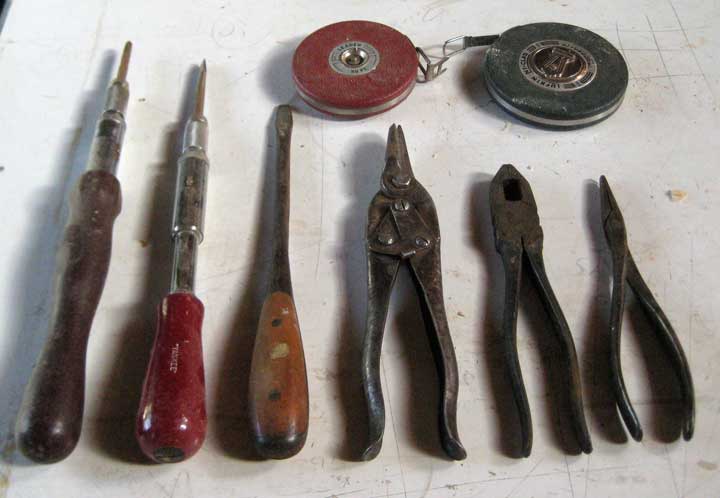 Another hand-me-down from either Wyman or C.E. Glenn. A chisel that continues to be used almost daily.

Stanley Victor #20 Cast Iron Circular Compass Plane. Circa 1879. Although not a family hand-me-down, a tool Ben picked up that quickly became a frequent contributor to any gate with an arched top rail.

Set the plane onto the underside of the arch and adjust the top gear to where the sole matches the radius of the arch. It essentially does the same job as the spokeshave, but better. 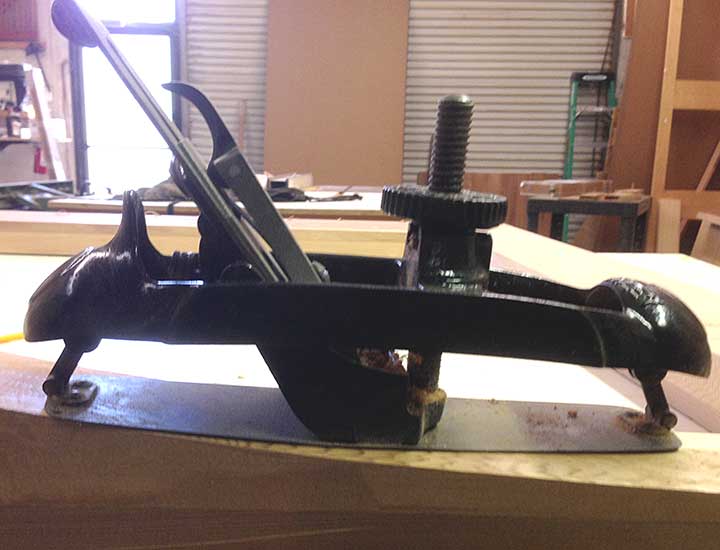 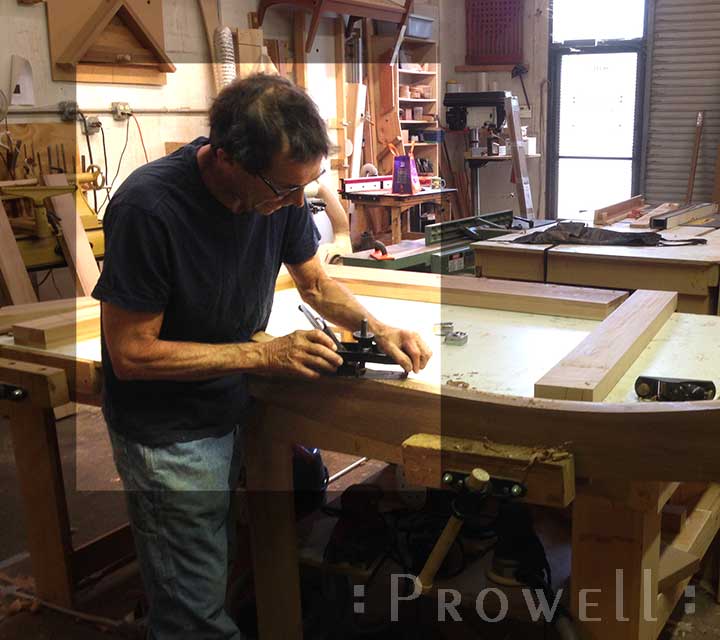